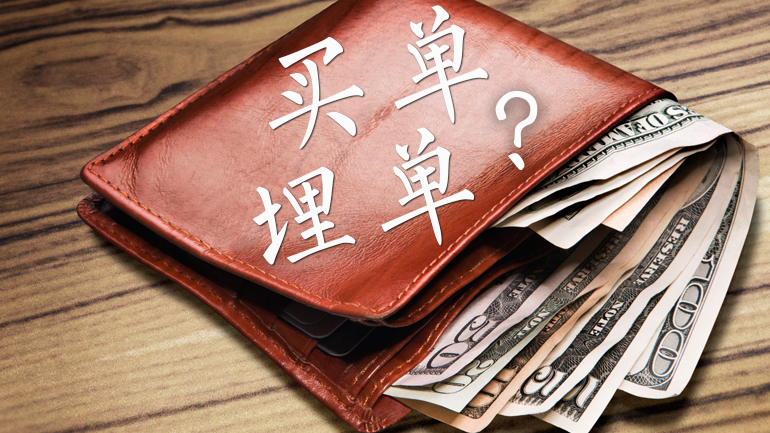 In Cantonese, "埋 (mái)" doesn't mean the same as it does in Mandarin.

In fact, the character "埋 (mái)" in Cantonese has many different meanings, one of which is "closing accounts". For example, the action of closing accounts in stores is called "埋数 (mái shù)" or "埋柜 (mái guì)"; completion of a project or thing is called "埋尾 (mái wěi)"; paying your bill after a meal is called "埋单 (mái dān)" or "写单 (xiě dān)".

So, does "买单 (mǎi dān)" exist in Cantonese? The answer is yes. It appeared about in the late 1970s when China just started the reform and opening-up policy, and was short of materials. Many emerging white goods like TVs and fridges were much cheaper in HK than in Mainland. Lots of people in Guangdong asked their relatives or friends in HK to shop for them. However, it was quite troublesome to take those goods back. Then the smart sellers came up with a solution allowing their customers to pay the bill in HK but pick up the goods with the payment receipts in Guangzhou, which is called "香港买单, 广州提货 (xiāng gǎng mǎi dān, guǎng zhōu tí huò)" in Mandarin. Therefore it is clear that "买单 (mǎi dān)" has nothing to do with "埋单 (mái dān)". "埋单 (mái dān)" means "making a list after totaling all expenses".

Some people think the pronunciation of "埋 (mái)" is the variant of "买 (mǎi)". After paying the bill, you are given the receipt from the waiter, and that is called "买单 (mǎi dān)". In fact, it is wrong.

Modern Chinese Dictionary introduces the original meaning of "埋单 (mái dān)" in Cantonese. However, we all know that when one language borrows words from other languages or dialects, pronunciation and meaning of those loanwords will often change, to be a little different from what they are in the source language, as they belong to two completely different language systems. There are many other similar cases. Nowadays "买单 (mǎi dān)" has become a widely-accepted expression in Chinese.