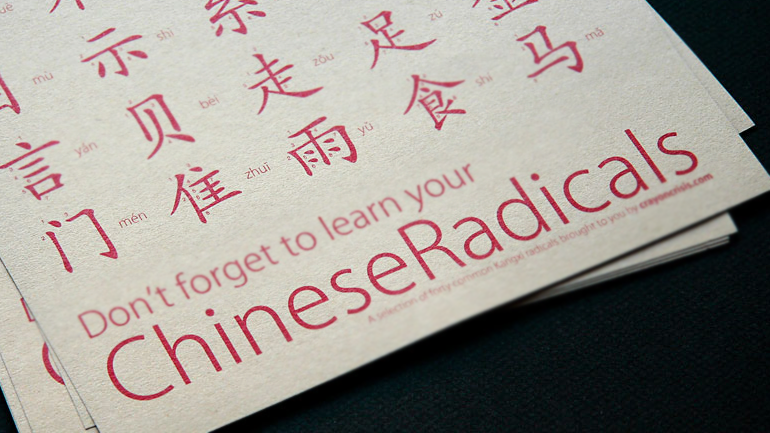 The following are a list of common radicals that will appear in Chinese characters. You will notice that many will be pictographs and ideographs, which makes it easier to remember. Learn to recognize these 15 common radicals, and you'll have started to read Chinese!

The radical 土 stands alone to mean "earth" or "dirt."  The following examples will all be associated with "earth" in some form.

This radical derives from the character 金, which means "metal" or "gold." Examples of words that relate to the general category of "metal" are:

As you can tell from the following words, the similarity is in the top part, also known as the plant radical. The radical 艹 comes from the simple pictograph of two blades of grass hiding a snake.

Already mentioned earlier in the article, 日 is a pictograph that represents "sun." When this radical appears in words, the word is usually associated with the weather, time or other sun-related concepts.

Another pictograph, the left side of the following words looks like drops of water and is a simpler version of 水, or water.

The 木 part on the left and bottom of each word stands for "wood." When you see this in a character, you will know it has some relation to wood or things that were originally made from wood.

You may recognize the 月 part as "moon" and wonder how that has anything to do with the body parts. It was originally 肉, which means "meat," but has transformed over time to take on the current symbol.

This radical is derived from 衣 which means "clothes." You can see the similarity between the character and the radical.

贝 (bèi) means treasure, and this is why it's the radical to represent money and wealth. 贝 also means "shell," and if you know your Chinese history, you might have already made the connection that in ancient China, shells were used as a currency.

This is where characters start getting tricky. The phonetic sounds that come from a character aren't rules, but rather the sounds are seen as helpful recommendations that will sometimes work to your advantage. Not only will you be able to get the phonetics out of it, it will often also represent something related to the radical that'll help determine the character's meaning.

Other times, it can cause confusion and you will find yourself wrongly pronouncing words that look alike and mixing up meanings of the words. So just be careful when learning these to get the tones right, as a slight change in the character can be a completely different sound and meaning.

All the following words will be a combination of different radicals to the base 辟 (bì). Many characters will have either an origin or reference to royalty.

The base word here is 扁 (biàn) which means "flat." Though sometimes a long shot, many meaning of the characters with 扁 will stem from the general idea of "flat."

Not related in sound to 圣 (shèng), which means "saint," there may be some reference in meaning to the word when adding various radicals to it.

All the following words come from 青 (qīng) which means "green," usually referencing nature. Some of the below words will have an obvious connection, while others may not be related at all besides in sound.

The main character 曼 (màn) means "long, extended," and similar to the above phonetic examples, you may be able to spot some connections with the following characters, while others will be a bigger stretch.

Not only are the origins of words fascinating to understand more about the history and culture of China, but now when you pick up a Chinese book or newspaper, you will begin to see groups of words instead of a jumble of characters.

This will allow you to pick out characters faster, and to memorize them quicker. With these tools in hand, you will be on your way to reading Chinese like a pro!

0 responses on "15 common radicals in Chinese"