How to learn Chinese without spaced repetition software 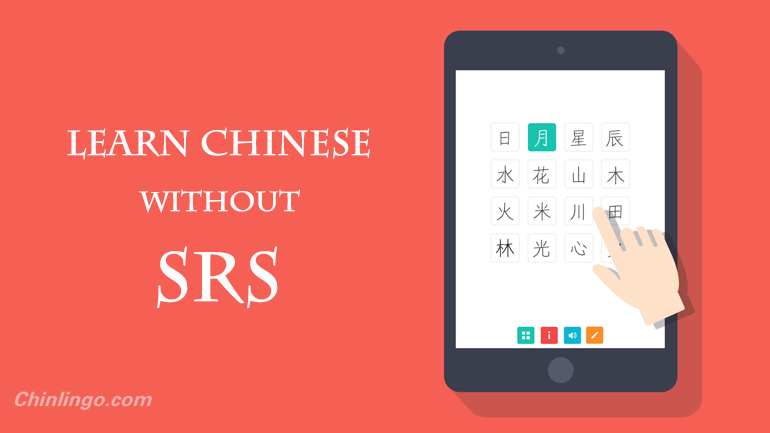 Spaced repetition is a method of reviewing that involves using programs such as Anki or Skritter to find the right time to review the words and characters you learn when you study Chinese. The idea is that the characters and words you know well won't appear often, while those you risk forgetting will appear often until you know them better.

This method of reviewing is extremely efficient compared to most other methods.

If you have never tried it, you should definitely do so, because it's likely to change the way you regard vocabulary learning.

Since these programs are available for your phone, you can also carry them around with you and review whenever you have a few minutes to spare, thus freeing up much study time for other things.

But what if you don't like it? What if you've tried the apps I linked to above, but you find it boring or you just don't want to use your phone for reviewing Chinese characters? There are alternatives that work almost as well, at least in certain situations.

Try them out and see if they work better for you!

The Goldlist Method – This method works well for writing, so is suitable for Chinese characters and words for those of you who care about handwriting. It makes use of a notebook where you write words in a relaxed and pleasing manner once (25 words per page). Then, two weeks later, you remove words you remembered from that list. Those that you still need to practice gets moved to the next page. You can of course start multiple sets of 25 words, you don't need to wait until you're finished with the first set to start the next.

True immersion – If you listen to and read a lot of Chinese, you will hear and see the words and characters you need to learn. This only works if you do it a lot, though, because even though the most common words will appear over and over in normal conversations and texts, rarer words will not. It can of course be argued that then you don't really need to learn them, but if you don't know a rarer word when you need it, that's not much help. Note that you need to listen and read a lot to do this! Just going to class and listening to an hour or two of podcasts per week won't do.

It should be mentioned that these methods aren't mutually exclusive and that moth of them can be combined with spaced repetition software.

In the case of the Goldlist method, you might want to learn character writing that way, but study other aspects using SRS.

When it comes to immersion, reading and listening a lot can be boosted by using SRS to remember. Since you will get most of the common words right from your reading and listening, SRS shouldn't take too much of your time, but still makes sure you aren't missing important words.

The consequences of not reviewing

If you don't review, you will forget. Period. This is particularly true for Chinese characters. Most students will remember how to speak and can get up to speed quickly even if they haven't studied for a while, but the knowledge of how to write characters by hand disappears very quickly if you don't maintain it. This is true for native speakers as well, and it's not uncommon for them to forget how to write some characters.

0 responses on "How to learn Chinese without spaced repetition software"