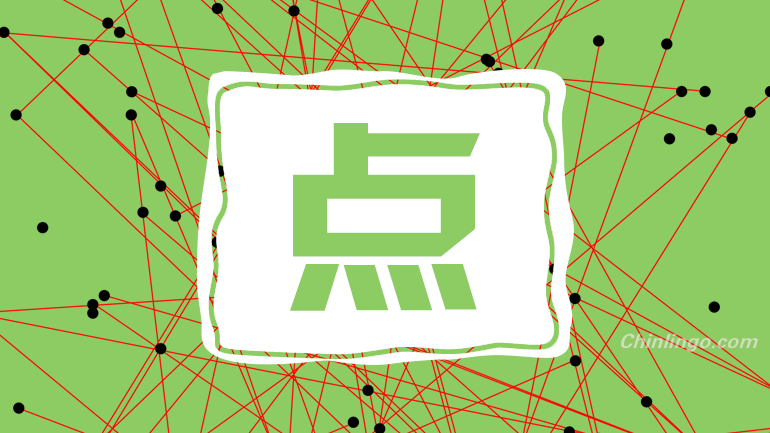 点 (diǎn) is one of those characters in Mandarin that pops-up all over the place.

In the dictionary, there are multiple meanings given, including "dot", "point", a "small amount".

点 was first used to mean "black dot", but how is it applied in everyday language today?

This post covers 10 key uses of the character 点, to help you navigate Mandarin's maze of little black points and dots…

Used as a dot or point

点 is used to describe the dot stroke in Chinese writing, along with other strokes that make up Chinese characters (learn more about that here).

点钟 means "o'clock" (think of a point on the clock). For example:

Little black dots are everywhere in the online world! For example, you could say:

4. A point of discussion or a point in time

Just in English, in Mandarin you can use the idea of a point to mean an article or argument for discussion or a stage in time. For example:

At this point, we must take action not just talk.

Let's discuss this point during the next meeting.

Used to mean "a little bit"

This means a little bit; a smidgen. For example:

Can you speak Chinese?

Adding 一点 after certain adjectives is used in making comparisons or requesting something, i.e. to be bit earlier or cheaper etc..

You're a bit taller than me.

This food is better.

Can you give it to me a bit cheaper?

Tomorrow can you come a bit earlier?

Add 有点 before an adjective to emphasize that something is a unwelcome or a problem, implying it's just a bit too much to be good. For example:

Outside it's a bit too cold.

差点 literally means "lacking a bit" and is used to mean "nearly", "almost" or "barely". For example:

She was so angry, she almost lost her cool.

I had a near perfect score in the test!

I almost died I was laughing so much!

9. As a measure word

点 is also used as a measure word, especially when referring to a small amount or "a bit" of something (as distinct from a countable amounts). For example:

He gave me a bit of advice.

I have some little things I'd like to give to you.

点菜 means "to order food". I consulted the Speak Up Chinese teachers about what ordering food has got to do with "black dots". No one was able to find a clear answer – maybe pointing at food? Either way, here's how you use it:

Which dish would you guys like to order more of?