How to write a postal address for a Chinese letter 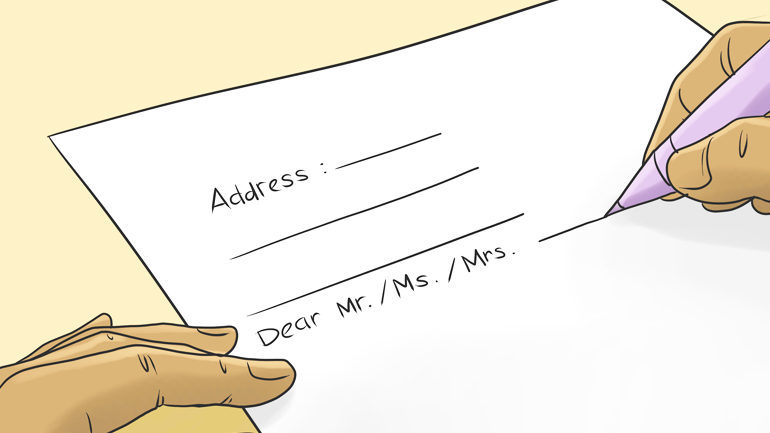 Writing an address is one of those abilities you take for granted. It's easy to come to do it in a foreign language and only then realise that you don't know how.

Use this guide for letters being sent into China from other countries, or for internal post going from one Chinese location to another.

It's best to use Chinese characters when writing the address, as this will ensure the fastest and most accurate delivery. If this isn't possible, make sure you've got the correct pinyin romanisation for the address.

In English and many other languages, addresses are usually written with the smallest location first, followed by increasingly large ones. In Chinese, this is the reverse. So if the address in English is:

It's written in reverse order in Chinese:

Split the address into two lines

The address itself is often split into two lines in Chinese. Where you make the split is up to you, but after the name of the city or county is usually a good bet.

Indicate the type of location

You might notice another difference between the English and Chinese versions of the address shown above. In Chinese, the type of location on each line is usually specified. For example, it says 青岛市 (Qīngdǎo shì) – "Qingdao city" – instead of just 青岛. After the country (you don't need to indicate that the first line is a country), you might have the following sequence:

县 (xiàn): county (you don't need the county for a large city)

Numbers are much more common in Chinese place names than they are in English. Blocks of flats often have their own names in English, but in Chinese they usually just have a number.

To give the number of something (roads, buildings, residences etc.), use the character 号 (hào). It comes after the number, which is usually written in Arabic numerals. For example:

When writing an address in Chinese, it's polite to include the title of the person you're writing to. This is put in brackets after their name. You can use their job title or a generic one like 先生. After the name and title, you can indicate that the letter is to be received or opened by that person by writing either 收 (shōu) or 启 (qǐ). For example:

"To be received by Mr Xiaofang Li"

This is probably the most essential part of the address. In mainland China (PRC) it's a six-digit code, and in Taiwan (ROC) it's three digits. In either case it should be written in the top left corner of the envelope.