How to express “too much” in Chinese 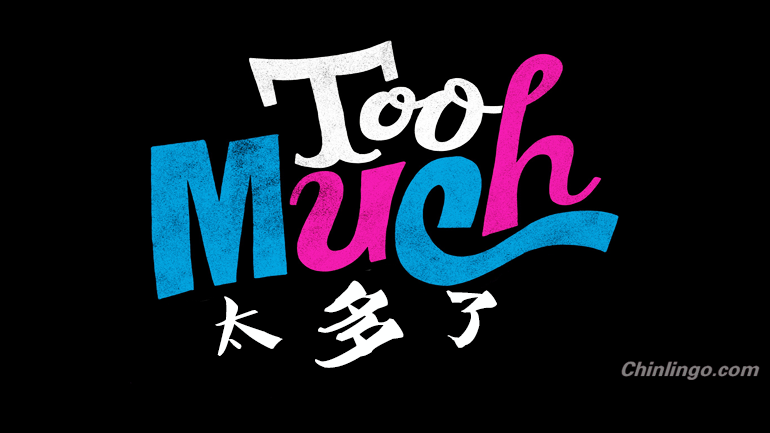 When we directly translate "too much" or "too many" to Chinese, the closest translation is definitely "太多 (tài duō)". However, the phrase "too much" in English has many more uses than "太多 (tài duō)" does in Chinese. So, let's take a look at how to use this simple phrase correctly in Mandarin.

你的衣服太多了 (nǐ de yīfu tài duō le)！= You have too many clothes.

他有太多的女朋友 (tā yǒu tài duō de nǚpéngyou)。= He has too many girlfriends.

One thing you should know is that although these two sentences are both grammatically correct, Chinese people would rarely use the second one. The "Subject+太多+了" construction is more useful.

他的女朋友太多了 (tā de nǚpéngyou tài duō le)。= He has too many girlfriends.

你的钱太多了 (nǐ de qián tài duō le)。 = You have too much money.

2. However, if "too much" instead modifies an abstract noun like "cold" or "comfort," using "太多 (tài duō)" is incorrect: please don't do this anymore! In Chinese, these words are only regarded as adjectives: not nouns like in English. Instead of "太多 (tài duō)," use adverbs that we can use modify an adjective, such as 太 (tài)……了 (le):

你这么做太过分了 (nǐ zhème zuò tài guòfèn le)。 = It's too much of you to do this.

4. Another common English structure is the use of the word "much" in a comparison sentence, such as "He is much taller than you." In this case, "多了 (duō le)/太多 (tài duō)/得多 (de duō)" should be used. The structure is: A+比+B+adjective+多了/太多/得多.

We hope this gives you an idea of how to correctly use "much" or "too much" in Chinese. Please comment below if 你有太多的问题 (nǐ yǒu tài duō de wèntí)!

2 responses on "How to express "too much" in Chinese"