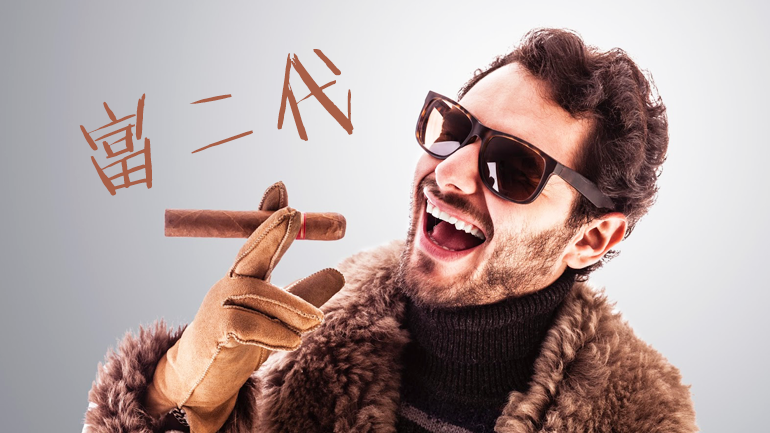 With the development of the society, new words in a certain language were born. So it is with Chinese. Among them is "富二代 (fù èr dài)". So, what does it mean? In this phrase, the Chinese character "富" means "rich". Grammatically, it is used as an adjective here. "二" means "second" or "two" and "代" means "generation". In English, "富二代" can be translated as "Rich 2G", the second generation that are very wealthy.

Since it came into being, this phrase has been very popular in spoken Chinese. It first appeared in a Chinese TV show called《鲁豫有约》. It refers to a group of young people who were born in 1980s or 1990s with silver spoons. Their parents are either millionaires or billionaires in China.

You may think it is a good thing to be rich and like it when people say that "Hey, you are rich". However, the phrase 富二代 has had a bad fame, sometimes regarded as an insult in China, mostly because of the bad behaviors and influence done by 富二代 in China. In China, 富二代 leaves such an impression: play with friends, drive expensive car, date beautiful girls, and often change girlfriends, often go to senior bars, often hold party, and keen on foreign brands.

Being rich is a very common phenomenon in modern China. But unlike their parents, who went from rags to riches during China's early stages of "opening up", Rich 2G members are often criticized for inheriting huge assets from their parents and are being labeled as a generation with less responsibility and an inclination to indulge in pleasure-seeking.

0 responses on "富二代: the young people born with silver spoons"