Learn radicals prior to Chinese characters 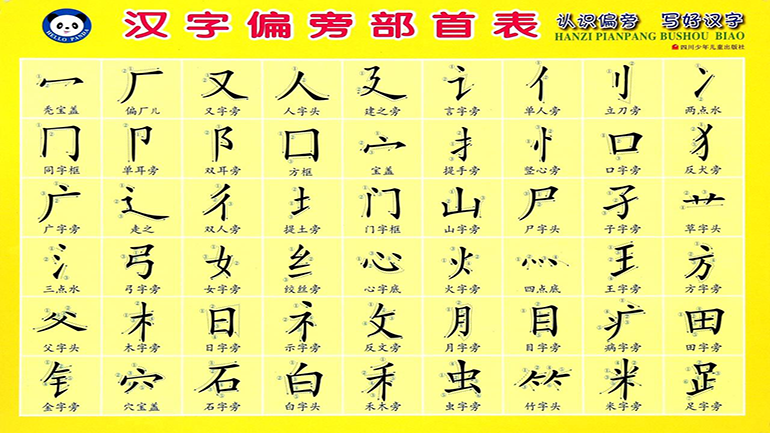 When I first came to China, the idea of a radical was just as foreign as I was and being able to use them to read had never even crossed my mind.

I remember the class when my Chinese teacher said we were going to do some writing. She gave my friend and I one of those books with the grids they give to school children and I just thought: "I have no idea what I'm doing!"

You can call it defeatist, or a bad attitude, but I honestly thought that it was just too complicated for little old me. Even as we started I felt like I couldn't even hold the pen properly to make a stroke. Actually by the end of the class I quite enjoyed myself, but it wasn't until after a few weeks that she began to teach us about radicals. That was when I got really excited about learning to read and write Chinese.

The fact that characters had a meaning, that they weren't just lots of lines that sometimes made pretty pictures was amazing! The penny dropped (from a great height), a light bulb went on after a long power cut and I realised that maybe I actually 'got' it and that even I had a chance to learn to read and write Chinese.

Learning radicals is important in order to further your Chinese.

So let's start by having a look at the following characters:

Now let's have a look at the left side of all four characters. You can probably see that what they all have in common is this: 亻(rén). This is a radical meaning 'person'. The 'person' radical is also the stand alone character 人, the radical is just turned slightly on its side.

So what does that mean?

I guess what we need to remember is that this written language has existed for thousands of years and has gone through many transitions, not all of them particularly sympathetic to the meaning of a character. The result is that sometimes, the meaning of a radical in relation to a character is a little hard to understand, because it is based on a traditional meaning. However, in this case the four characters have a direct connection to the 人 (rén) radical.

休 (xiū) is a pictographic character so it can literally be taken apart. We have "亻"meaning person and 木 (mù) meaning tree. So what would a person be doing stood next to a tree? Having a rest of course! After hours of working in the fields, he sits down in the shade of the tree and relaxes.

The meaning of 休 (xiū) is to have a rest.

The meaning of the next three is less obvious, but because of the radical you can tell that they must have something to do with people.

A radical usually indicates the meaning or pronunciation of a character.

Radicals are not only important to help us understand the meaning of the character, but it also helps when using a dictionary. Now, I know most of us are using online dictionaries and Chinese dictionary apps, but there are still people using those things made of paper (shock!). Basically, in order to use a  Chinese Dictionary you need to have a good knowledge of radicals to find a characters.

Here are some basic instructions for using a Chinese Dictionary:

1. First you need to know which radical the character was indexed under. You can probably guess by using the element on the left or on top of the character.

2.Find the section of the dictionary related to that radical.

3. Count the strokes in the remainder of the character (not including the radical strokes)

4. Find the pages that include the radical that also have the number of additional strokes.

5. Find the character you're looking for, or repeat steps 1-3.

Let me give you an example.

I want to find this character 晚 in the dictionary. So following my steps, first I need to know which radical to look for…

1. I looked at the left of the character, and found 日 (rì), the sun radical. 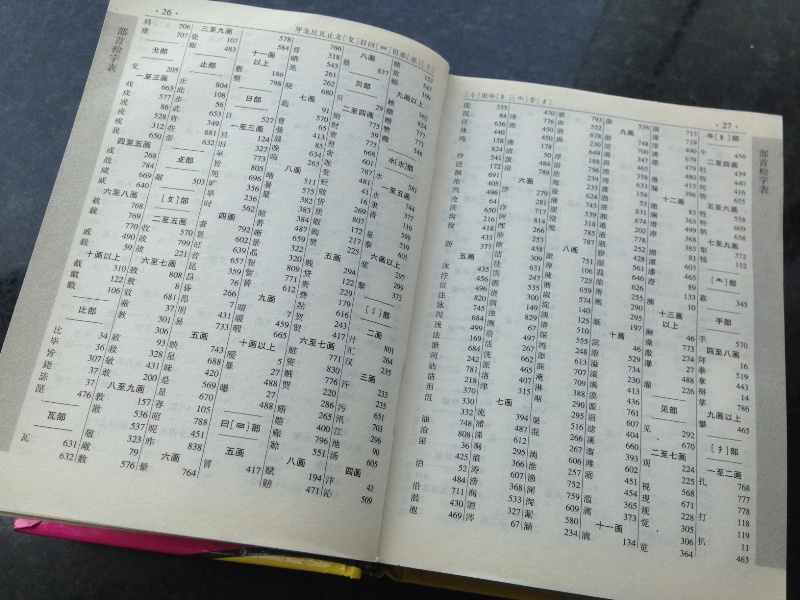 2. Now I know that this character has the radical 日, I can find the pages in the dictionary. 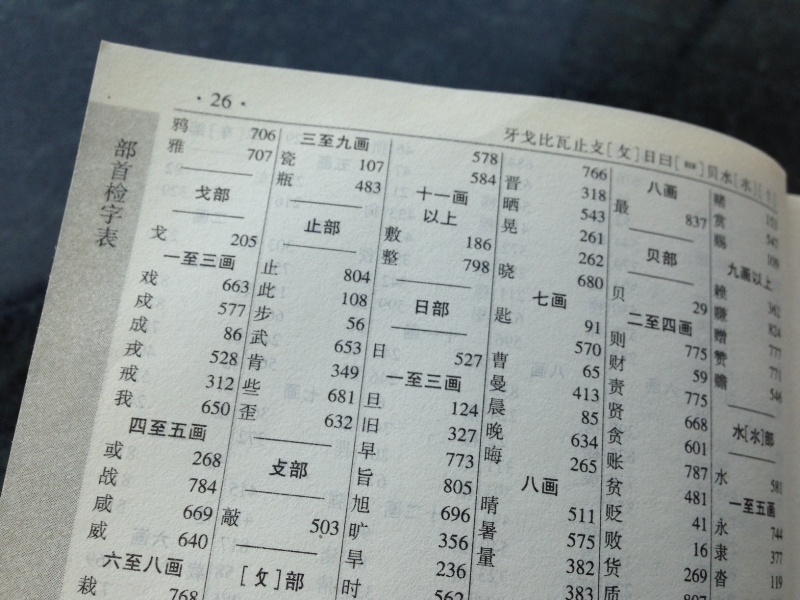 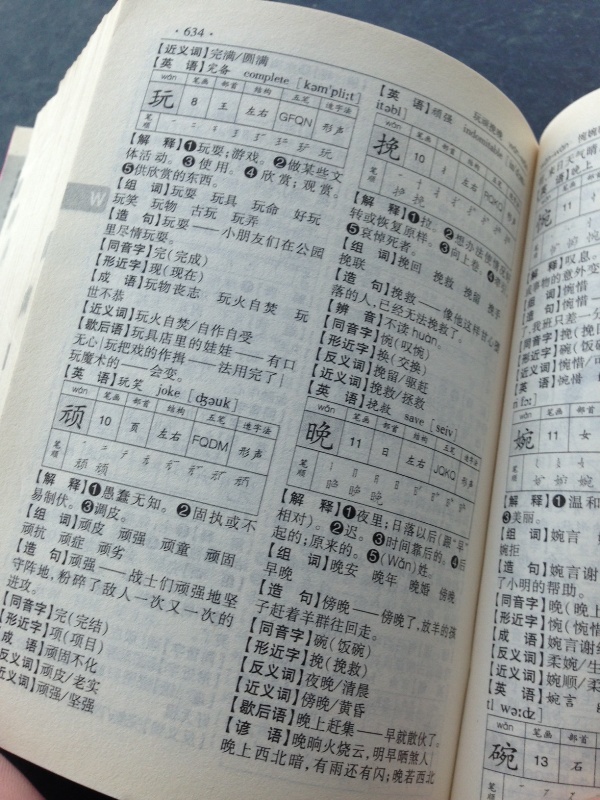 5. There it is at the bottom of the page! 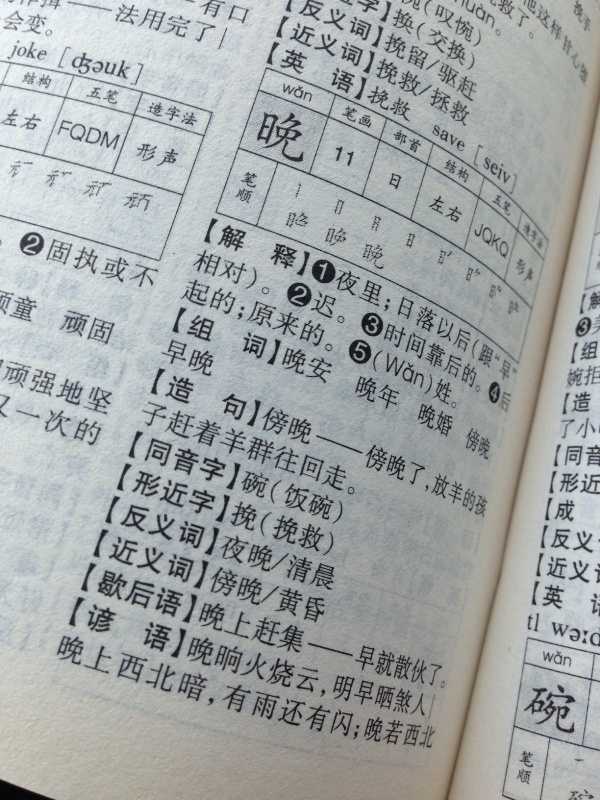 If you weren't sure, 晚 (wǎn) means evening or night. So, grab yourself a dictionary and get searching!

We all know that learning Chinese is a challenge, but what's important is not to feel defeated. Learn at your own pace, with tools that work for you and most of all enjoy it and treat it like an adventure!

0 responses on "Learn radicals prior to Chinese characters"