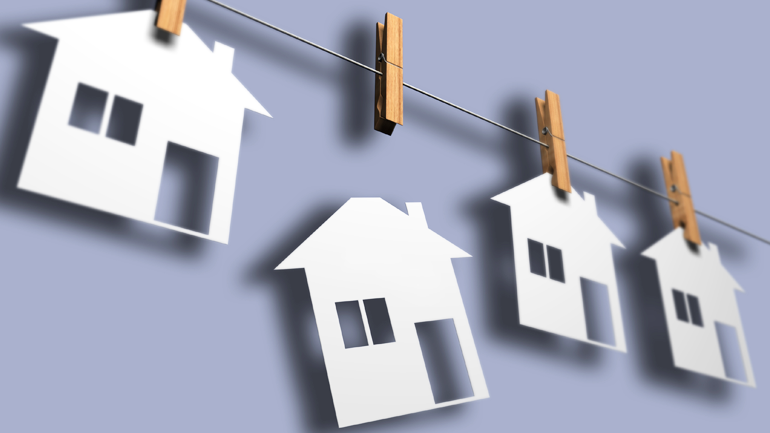 I have moved three times in my three years in China, and the first move happened only two months after landing on this foreign soil. So I had to learn some useful phrases fast.

Unless you have super connected connections, the normal way to go about finding a flat is through an estate agent: 房产中介 (fáng chǎn zhōng jiè).

房产 is "real estate" and

I wish English were this straightforward.

Estate agents are very hard working, and will drop everything to show you apartments at any time of day. You can expect the fee to be 50% of the first month's rent.

The only thing we found difficult was making sure they narrowed their list to match our checklist, as they tended to get excited and drag us around every listing they owned regardless of what we asked for. We were shown many two-bedroom flats despite stating clearly that we needed three bedrooms. They were like, "Can't you just get rid of one friend?" Erm, no actually, we can't.

The first thing I learnt was the word for balcony: 阳台 (yáng tái) because in my opinion they are the saving grace of all apartments in China and my number one requirement: a big balcony. Also, it is easy to remember:

Does this apartment have a balcony?

I wasn't satisfied with just any balcony. I wanted the biggest balcony conceivable:

Another disappointment with most apartments in China is the size of the kitchens (厨房). In the West, kitchens are so important they are often the pride of the whole house. But here, because eating out is so cheap and because most Chinese dishes need nothing more than a wok and a chopping board, kitchens are not really given much status. So if the kitchen is as important to you as it was to us, you will need to emphasize that:

Some foreigners are very 厉害 (lì hài, strong) and go for the old apartments老房子(lǎo fáng zi) with cheaper rents and then undertake the task of doing up the flat themselves.

The condition, cleanliness and decoration of the apartment is all summed up in the word 装修 (zhuāng xiū). So if you are brave and willing to fix the place up yourself for a cheaper rent you can explain:

Actually, I prefer old apartments, they don't have to be that nice just as long as they are cheap.

However, if, like the rest of us, you want to complain about the cracked walls and uneven floors:

Don't forget to specify what kind of toilet you want, as it might not be as obvious as preference to the estate agent as it is to you.

So as you can guess, my request was

More about how to search for an apartment online, how to catch estate agents on disguising the negative aspects and some crazy apartments we have been privileged enough to see coming up in the following part.

In the previous part, I looked at some essential words you need to know when searching for an apartment in China, for example, estate agent, balcony, kitchen, decoration, toilet and more. Here I will look at some major differences in the way apartment hunting is done here in China that you should be aware of. Hopefully the following will make your apartment hunt a little smoother.

One difference I noticed is that the apartments we were shown were mostly already empty. Meaning that you are expected to be able to move in straight away. Meaning that apartment hunting is not often done in advance in China.

We wanted to move out by the end of July, so we thought it would be a good idea to start looking at the end of June. Not so much. Even though we made our time schedule clear to the agent, they only had empty apartments listed. Apartments are listed only after the tenants move out. The thought of looking at apartments that would be empty next month was beyond their scope of imagination.

Starting your apartment hunt anything more than two weeks early is pointless.

Apart from contacting a million estate agents, we wanted to do our own research online as well. There are many sites you can use, but 赶集网 and 58同城 are probably the most well-known.

How many rooms: 厅室 （tīng shì）

If you are starting from scratch and don't really have any specifications, you can select 不限 （bù xiàn） for all of them.

It was not long before we sensed a pattern when searching online: every time we found a great flat, the agent would tell us it was no longer available. So we made two conclusions:

1) Pictures are mostly just to give a general idea and often have nothing to do with the apartment advertised. It is possible to see two different apartments (in different areas at different prices) with exactly the same pictures.

2) Apartments listed online are mostly already rented out despite being advertised as available. The estate agents simply use the websites to display the kind of caliber of apartments they list.

Bottom line; don't trust what you see on house-hunting websites!

When agents are describing houses, they have their ways of disguising the negative aspects that you need to watch out for:

简装 (jiǎn zhuāng): literally "simply decorated" means its probably in no condition to live in or needs serious work.

三房 (sān fang): literally "three bedrooms" but usually turns out to be two bedrooms and a tiny room in some dark corner of the house which is usually a result of bad planning.

安静 (ān jìng): literally "quiet" but probably means out in the sticks with no access to public transport or in a complex for elderly people where any ounce of music played will be complained about loudly.

Our apartment hunt turned out to be quite the adventure. We saw some very weird apartments and they just got weirder. In some the kitchen was only accessible by the balcony. One had a makeshift bedroom constructed in the middle of the living room by erecting four glass walls then hanging curtains around them. One had two giant Ming vases, which to our horror, contained large snakes pickling in alcohol. Another came complete with bar and tea room, again enclosed in a glass box. One time the estate agents couldn't open the door with their key so they broke it down, only to realize that it was the wrong apartment number and they had essentially just broken into someone's home.

Happily, we managed to find a normal apartment (or maybe it just seems normal in comparison) and are quite happily settled in. So remember, when looking for an apartment in China, the best way to do it is with a pinch of salt and a lot of laughter.

I hope this helps in your search for an apartment, but once you have one, making it a home is up to you.

0 responses on "Useful Chinese expressions in apartment hunting in China"