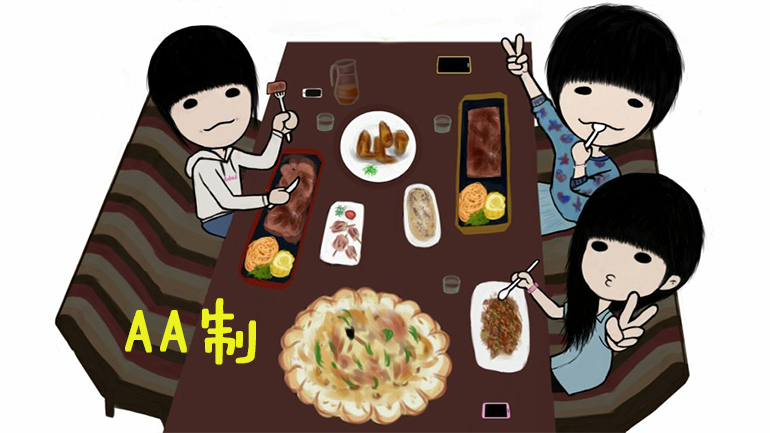 Today, we'll talk about two terms you're unlikely to find in your textbook. But here's the good news: you definitely know how to write them (or at least part of them)! Both these terms use the letter A, and it's pronounced just like it is in English (rhymes with hay). Chinese slang has never been so easy!

If you go out to a restaurant in China, probably someone will offer to treat everyone else at the table when it comes time to pay. There may even be fighting over the check. If you want to do things the "Western way", where everyone pays for their own food, you may have been taught the phrase 各付各的 (gè fù gè de) ("everyone pays for themselves"). But this expression is about as common among Chinese youth as "going Dutch" is among American youth. Nowadays, it's called AA制 (AA zhì).

The name, supposedly, was originally an abridged form of "Acting Appointment", but many people now explain it as standing for "All Apart," as in, "we all pay for our food apart from one another."

You've seen A货 (A huò) everywhere. You might even be wearing some A货 right now. A货 is a generic, catchall term for imitation products. Those fake Louis Vuitton bags everyone seems to be buying these days? A货. That imitation-Bathing Ape hoodie you saw on the subway? A货. (Another common slang term for off-brand imitation products you may have heard is 山寨 shānzhài, but it’s got connotations and meanings that go beyond that).

Recently, Youku (one of China's most popular video websites) even dedicated an episode of their online show I Have Something to Say (我有话要说 Wǒ yǒu huà yào shuō) to A货, asking people on the streets of Beijing and Wuhan whether they liked to buy A货 and pretended to be rich (假装有钱人 jiǎzhuāng yǒu qián rén). Most people agreed they were willing to buy A货 because it was inexpensive, but said you should be honest about it.