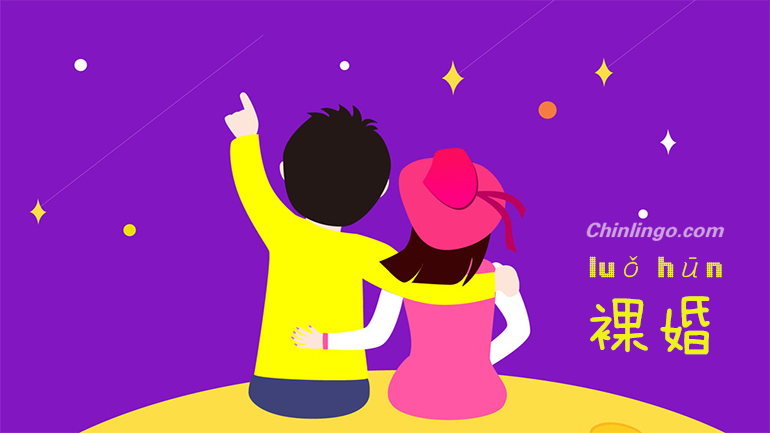 裸婚 (luǒhūn), literally meaning "Naked marriage", is a Chinese slang, coined in 2008 to describe the growing number of marriages between partners who do not yet own any significant assets.

A very popular television drama at the moment in China is called 裸婚时代 (luǒhūn shídài) which means "Era of Naked Marriage"; it can be found on Youku and other video-streaming sites. Before you are mislead to think these are nuptial vows performed by nudists, a "naked marriage" (裸婚; luǒ hūn) in China refers to a situation in which both bride and groom are entering a marriage without having first procured a house, car or any financial savings. It is used both as a noun and as a verb. It refers to a kind of simple marriage in which the new couple skips the traditional ceremony and customs by getting their marriage license directly.

While this is common for other cultures, Chinese traditionally prefer to only enter a marriage when it is financially comfortable to do so, usually after many years of working to earn a house, car and nest egg. This trend influences other aspects of Chinese life: as he must earn the financial stability required for a marriage, Chinese men often marry later, usually around 30 years of age; and as child-rearing is important, Chinese women are often not the same age as their husbands but younger in their prime child-birthing age, usually before 30.

In modern China, the age range of those young people who are enthusiastic to "裸婚(luǒhūn)" is generally 20 to 30 years old, most of whom belong to the post 80's generation. There are mainly two reasons for their choice. On the one hand, it is because of heavy living pressure, such as that caused by the rising costs of housing and commodities. On the other hand, many modern people emphasize the freedom and independence of marriage. They pursue "genuine love" not influenced by material conditions, and they also care less about the traditionally significant wedding. As a result, "裸婚 (luǒhūn)" has become the most fashionable marriage option among the post 1980's generation.

0 responses on "裸婚: marriage without "must-haves" popular in young Chinese"