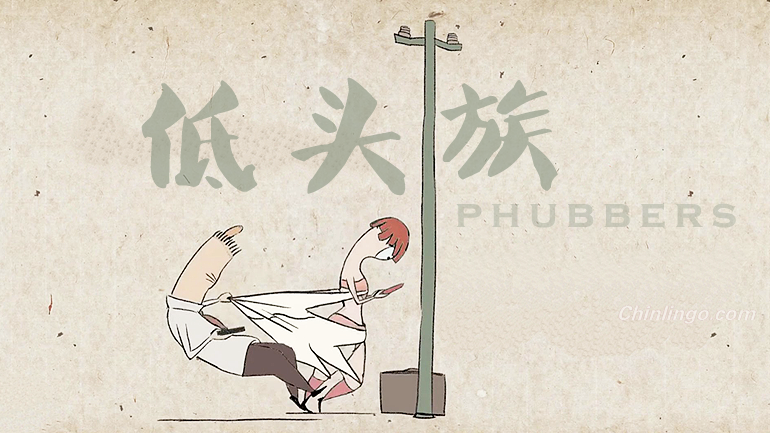 Have you ever been looking at your smartphone instead of paying attention to your friends while chatting, just because you need to reply to a text message? If yes, you are one of the "低头族 (dī tóu zú, phubbers, or smartphone addicts)" in the 21st century.

The word "phubber" is the combination of the words "phone" and "snubber", referring to the people who lower their heads looking at their smartphones or tablets all the time and snub people around them. This behavior is called "phubbing". The word "phubbing", together with its related derivative words, first appeared in 2012, formed from a blend of the noun "phone" and the verb "snub". 'Snubbing someone' is growing as more and more people are getting addicted to a smartphone or tablet.

"低头族 (dī tóu zú)" can't leave their digital devices aside when surrounded by others on a party or a night out, and they get even more addicted when they are alone. "低头族 (dī tóu zú)" either check their screens, or use tablets or laptops to surf the Internet, play games and watch videos. They try to fill their free time by staring at the screen.

Most of these "低头族 (dī tóu zú)" are young people. They often appear in the subway and the bus, or on the streets and alleys in urban areas.

As smart mobile devices such as smartphones and iPads become more and more popular, every moment in our life can get taken over by these digital devices.

One-to-one conversation is the most frustrating situation when one person just stares at the phone, making the other person feel as if the partner is not interested in him/her or the conversation itself. Traveling with others in a car or using public transport, however, is considered as the most acceptable situation in which phubbing usually takes place.

For some young people, it is quite common to live in that way, while for others, it is rather impolite to focus on the phone all the time and ignore people around you, which ruins the beauty of everyday life.