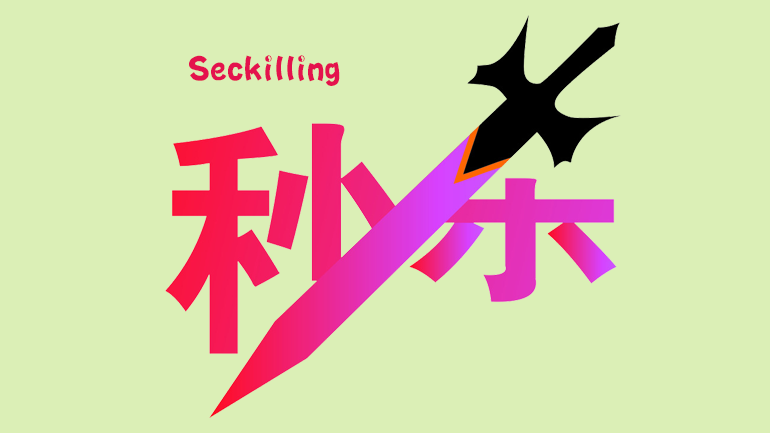 "秒 (miǎo)" means "second," as in the unit of time, and "杀 (shā)" is a verb which means "to kill." Combining them, "秒杀 (miǎoshā)" is translated literally as "one-second kill." The term originated from online, multi-player videogames, in which a player who doesn't have any other option is killed or kills his opponent in an instantaneous attack.

When 秒杀 (miǎo shā) appears in the network game, 秒杀 (miǎo shā) (seckilling) can be used when players are fighting against each other or a monster, since another party is extraordinarily strong and given that players are killed instantly, in a split second, before they are able to fight back or escape. Here, 秒杀 (miǎo shā) used in the game is often described to kill out the opponent, which also is the original meaning of 秒杀 (miǎo shā) in network.

As time goes by, the meaning of 秒杀 (miǎo shā) changes. Now, the term has also become popular in the online shopping community to define the rapid sell out of newly advertised goods. When it comes to shopping, "秒杀 (miǎoshā)" means "seckill," a new term that refers to a sales method with which online vendors sell an expensive product at an exorbitantly low price far below market value for a given time period. For example, they may sell an iPad for just one Yuan. With such a low price, a lot of Chinese netizens will flock to the website at the designated time, constantly refreshing their screen until the given moment arrives. For just one second, the price will plummet and the shopper whose index finger clicks the fastest will walk away with an incredible bargain.

You are often seckilled when playing a game. Act faster next time!