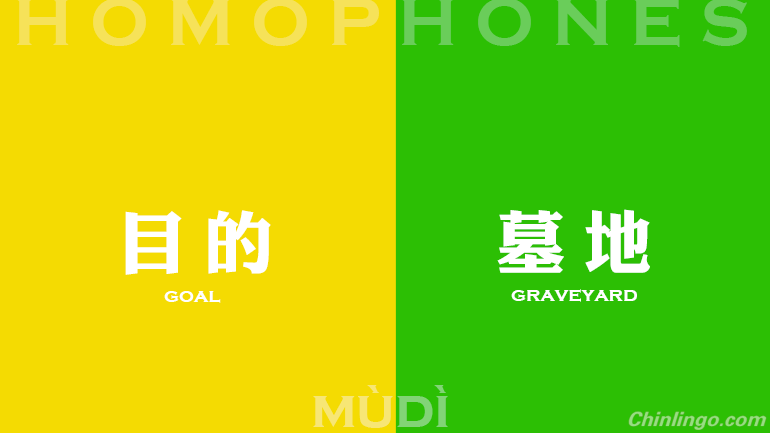 To a non-tonal language speaker's ear, Chinese can sound like just a jumble of similar sounds: "Shi si shi shi si, si shi shi si shi." Once you get your tones down, and manage to avoid those tonal traps previously mentioned, you will be better able to distinguish between similar sounds according to their tones. "Shísì shì shísì, sìshí shì sìshí" (十四是十四, 四十是四十 14 is 14, 40 is 40).

When you've got that in the bag, the wonderful Chinese language will then present you with an even greater challenge: homophones. Same tones, different characters, different meanings.

Don't go thinking these are few and far between, no, indeed not. Given the immense number of characters and the fact that there are only a certain number of 'phones' to go round (and only 4 tones, yes, ONLY 4 – Cantonese has 9 tones if you can believe it), homophones are inevitable. They are just a fact of life, you can't run from them, believe me I have tried.

Let's have a look at some examples:

And then check these ones out – same pronunciation, multiple meanings:

shìlì: which can stand for:

势利: selfishly concerned with gaining advantages for oneself; favourable

Fun isn't it? Actually, the Chinese do have a lot of fun with these. They are much easier to digest with a pinch of humour.

A man is a difficult person.

A promotion is an increase in worth.

Awesome. Pull these out as party tricks and you will immediately be accepted into the fold, for sure.

I heard a story about a British student who managed to do just that – impress his teacher with his mastery of homophones:

He read a book on Titanic in Chinese, and then wrote a comment about it:

This "chénmò" can mean "silent; taciturn" (沉默 ) and "to sink" (沉没). He was lucky enough to find the perfect context in which to use both.

Have you found any other good situations to use puns in Chinese? Tell us about them in the comments section below!

0 responses on "Hazardous homophones in Chinese"