How to learn Chinese near-synonyms 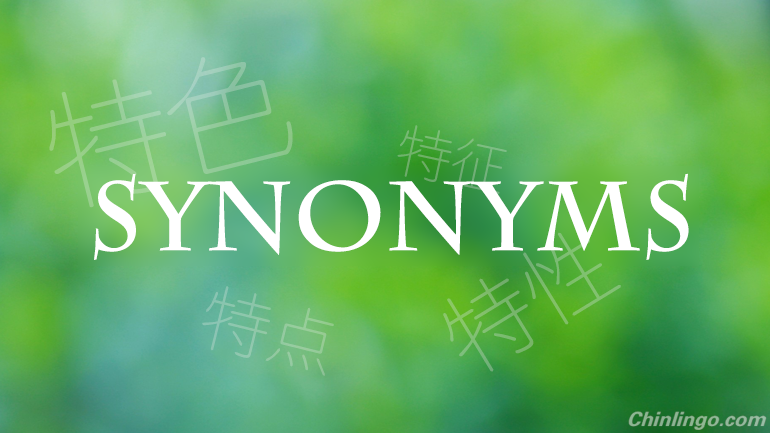 Even for native Chinese speakers, near-synonyms (近义词, jìnyìcí) can be confusing and easily misused. For Chinese language learners, figuring out meanings and distinguishing between the usage of near-synonyms can be a daunting task.

The sample word list he provides is: 特色 (tèsè), 特点 (tèdiǎn), 特性 (tèxìng), 特质 (tèzhì), and 特征 (tèzhēng). These words could all be translated into: characteristics, features, properties, and qualities, but they are still not interchangeable in most cases and mean different things or have different collocations when appearing in the same sentence.

The key is to combine knowledge and exposure. Massive exposure is not enough for identifying the specifics that distinguish near-synonyms. One has to actively look the words up in the dictionary, register how they are used in different circumstances, understand the contexts, and remember their differences.

Suggestions to hacking near-synonyms in Chinese:

Use more than one dictionary. Just because the first dictionary didn't give you any clues, don't give up, perhaps other dictionaries have better definitions and examples. If you're okay with Chinese-Chinese dictionaries, try at least one. It might not help much, but it's much more likely to help than any Chinese-English dictionary.

Search for the terms on Google. This is much more effective than you might think. The likelihood is that other people have asked the same question and you might find the answer by searching for old discussions. If you can't read Chinese comfortably, either include "English" in your search (thus enabling you to find Chinese people learning English) or search for pages in English.

If your Chinese is okay, use Baidu. Apart from the general dictionary, there is also a section called 百度知道 which has lots of discussions, questions and answers. Provided that the words are actually very close to each other in Chinese (i.e. it's not just the result of the words being close in your native language, but not Chinese), you will probably find something. However, do note that just because a native speaker says that something is right, that's not necessarily the case.

Post your question online. If you have tried the above two methods and still have no clue, you can post your question either on Chinese-Forums or on Chinese Stack Exchange. Both these sites are incredibly useful, but make sure you show other people that you've tried to solve the question on your own, otherwise people might not volunteer their free time to help you. This includes searching through old posts making sure someone else hasn't already asked the same question.

Ask an educated native speaker: If you're enrolled in a program, asking your teach is obviously the ideal solution. However, be aware that native speakers don't have perfect knowledge of their own language. Even if someone tells you that the difference between A and B is X, they might be wrong. Educated native speakers refer to people who have an education related to languages in some way. They are much more likely to give you a good answer, especially if you give them some time to think.

Look through lots of sentences. This is time-consuming but very useful. Not only do you get to read a lot, you will also see the near-synonyms in action. This is something you can do on your own to figure out the differences between them, but it's also something you definitely should do after learning about the difference between the words. Solidify your knowledge by seeing the words used in practice. Be aware that whatever rule you've found for how to use the words will never work 100%. That's okay. If it covers 90% that's already very good.

Read books about synonyms. There are books available that deal specifically with near-synonyms, although most of them are in Chinese. Books like these aren't useful only as reference material. Just put them somewhere where you usually have some extra time and read through an entry or two when you have a few minutes to spare."

A lot of times, near-synonyms appear in literature and other reads more than they do in daily life. It would be easier for Chinese language learners to start with easily misused words in normal conversations, which would not only increase exposure but also practice. For example, 成果, 后果, and 结果 all share the common meaning of "results" and "consequences", but 成果 refers to achievements and good outcomes, 后果 is used to imply negative outcomes, whereas 结果 could mean both good and bad.

0 responses on "How to learn Chinese near-synonyms"