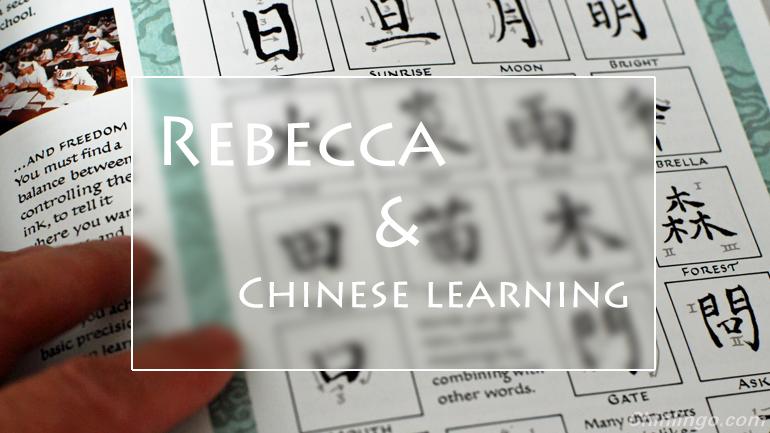 Learning Chinese for: 10 years (on and off)

What made you want to learn Chinese?

I have always been fascinated by Chinese culture because I knew nothing about it. My family practiced Qigong (气功), which made me want to know more and more. There was a lot I didn't understand because I couldn't speak the language.

I also had access to a Chinese community in the States when I was 16 and working in a vegan Chinese restaurant. Talking to people and hearing about their lives and China's long history really peaked my interest in China.

For my college entrance essay I wrote about this amazing woman who worked with her husband in a restaurant and had managed to send their daughter to Wharton Business School. She told me a shocking story about her brother-in-law trying to kill her with a knife once, and her husband not doing anything about it, but sticking to the "blood is thicker than water" principle instead. I was fascinated by the stark social and cultural differences between the two countries.

Did you find Chinese enjoyable to learn?

I found the sense of accomplishment awesome.

What was the hardest part about learning Chinese?

Everyone telling you it is 'impossible'.

The hardest part of writing is remembering all the components of each character and putting them all together. I remember my friend trying to teach me to write 明天(míngtiān/ tomorrow) and I only wrote the 月(yuè/ moon) part but totally forgot the 日(rì/sun) side. That was when I was like, "Man, this is hard!"

The hardest part of reading is memorising so many characters. The English alphabet allows you to at least be able to sound out new words, but you can't do that with Chinese.

The hard part of speaking is all the homophones. But luckily I have an ear for the tones so I got used to them pretty quickly.

What I personally struggled with most was the academic side of learning Chinese. You actually have to sit down and study if you want to be literate. I have never been a person who studies really hard, but I was with Chinese for some unknown reason.

I worked my ass off in my first and second year of college before I went to China, and when I got there I was like, "I know nothing!" even though I was better than most of my classmates before I left. Going to order food was tough because in class you don't study all the flowery names they give their dishes like "8 treasures this" and "gold palace that".

Do you remember the first word you learnt?

In the restaurant, sometimes I got left in charge and so I needed to learn certain things. I remember trying to say "spring roll" but we didn't' understand each other so I was rolling my arms around trying to act out "spring roll". Didn't work.

What language tools do you find the most helpful?

It depends on the person but for me, using flashcards works best. There are so many characters to learn and it's not obvious how to pronounce them, so flashcards are great because you can use them to regularly remind yourself of new words. I recommend spending a few minutes a day going through flashcards, even if it is just one before you go to bed at night.

What difference has your Chinese proficiency made in your life?

Chinese is great because people think you are a smarty-pants when you can speak it. In America I didn't do well in maths but I like to think that Chinese makes up for that!

I am always learning more and it's endlessly useful – there are so many jobs that require it. Chinese will always be useful, or at least, that's what I tell myself.

If nothing else, it is a great party trick!