Is it better to learn Chinese in a group or one-to-one setting? 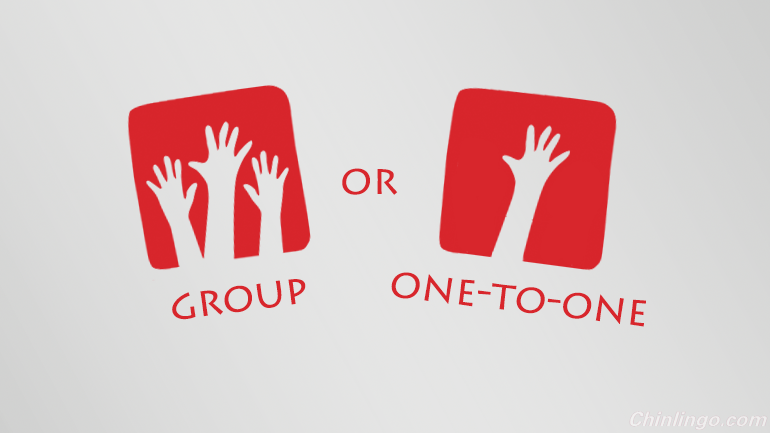 When I first moved to China, I was working full time and only had a few hours a week set aside to tackle the language beast. I didn't have the opportunity to join a class at the time, and just learnt by going through a textbook with a teacher.

I felt this was much too slow for such a demanding environment that requires full literacy to order a bowl of noodles, but I was happy that I could barrage my teacher with endless questions. Not sure she was so happy about that.

It was not until two years later that I was able to study full time at a university. Learning in a group was lots of fun. And it was easier because, one: it allowed for repetition, which helped things sink in better; two: it was great to try out dialogues with other students and comforting to know we all struggled with the same things; and three: a little competition meant we mutually kept each other sharp. Of course, sometimes I wanted the teacher all to myself to hash out some stuff, but overall I believe I learnt much faster in a group setting.

This made me curious about other people's experience, so I asked a few fellow friends about their opinions on group vs. one-to-one settings:

Seth (Fluent in Chinese, studied on and off for six years):

"I think it really comes down to the individual learning style. I personally study a lot just individually, using material that native speakers would use, and figuring it out with the help of friends and dictionaries."

"But I would recommend taking a group class if you are trying to get the basics down. Just try a class out and see if you are interested. Studying one-on-one can be expensive but it is good once you are at a more advanced level. Then you spend more time to focus on specific skills you want to try and improve. But if you are just starting and you want to learn how to write characters and whatever, start out with a class. Plus you can meet other students and start to build a network."

Bjorn (Fluent in Chinese, studied on and off for 9 years):

"I think that the class situation is very important, but a class should never exceed 6 people. If you are in a school that is teaching more than 6 people in a class you are wasting your time, in my opinion. You should find a school that makes sure you get the most amount of attention possible – after all, you are the one coming to China and paying good money to learn."

"When you really need to push it you should get an individual teacher. At the beginning levels you can learn in big classes but I know that some big schools are just money churners and they really put a lot of people in a class, which is not a constructive environment."

"My school generally had 10 people at most in a class and we were all given one-to-one time with the professors. There are some private schools in China that do that and maybe some good public university programs, but a lot of programs are just not equipped for that."

Rebecca (Fluent in Chinese, studied on and off for 10 years):

"I think for the beginning levels of language learning it is really important to start out with group classes. The structure of Chinese, or any language, is difficult to grasp on your own. So it's really useful to have introductory courses that can explain basic sentence structures and grammar, just to give you a basic structure. And then from there, once you can use a dictionary and you have made some local friends, you can pretty much just continue studying on your own, build off of the structure you have established."

"In a group you get to hear other people's mistakes and you can identify where you make the same mistakes. Later, when you reach a basic proficiency, it's about working on where you make mistakes that other people don't. When you are starting off and learning basic words like "red", you don't need a specialist. Studying one-to-one is like working with a specialist to fine-tune the stuff you really care about."

All in all, a little bit of both is, as it is with most things, probably the best way to go.

We'd love to hear more about your learning experience, so feel free to share with us in the comments section below!

0 responses on "Is it better to learn Chinese in a group or one-to-one setting?"