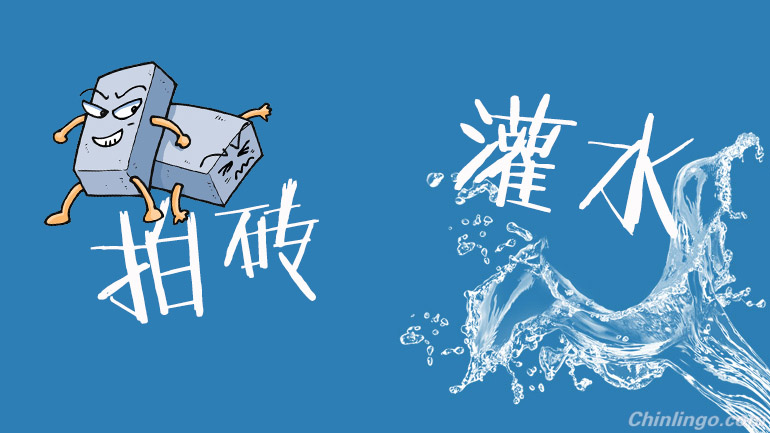 A "主帖 (zhǔ tiě)" on online discussion boards, or forums, is the first post starting a topic, while the comments on the first post are called "回帖 (huí tiě)". With more and more "回帖 (huí tiě)", like a multi-storied building, the post gets increasingly "higher", therefore, the publisher of "主帖 (zhǔ tiě)" is called  "楼主 (lóu zhǔ)" or "building owner" in English and the act of replying to the first post is called "盖楼 (gài lóu)" (building a house). A building is made up of bricks, which can also be used to hit people. Therefore, just like hitting people with bricks, the act of opposing or criticizing the first post and its comments is called "拍砖 (pāi zhuān)" (throwing and hitting with bricks).

"灌水 (guàn shuǐ)" originally means injecting water to a container. After the emergence of discussion boards in the Internet age, it has a figurative meaning of posting a large number of insignificant messages.

"灌水 (guàn shuǐ)", also called "flooding" in English, is said to have a strong connection with Regan, the former US president and an online discussion lover. During his presidency, he often took advantage of the bulletin board system to become aware of people’s problems. He made many friends online with the ID "add water". No one knew that it was the president until he revealed the secret to his friends after leaving office. Shortly after that, a surge of e-mails and posts from netizens trying to connect, seeking revenge or asking for help from the former president flooded the forum. Being afraid of reading those emails, the webmasters had no choice but to buy many hard discs continuously to maintain the website. Unfortunately, the website still crashed.

It is said that Reagan has compensated the webmaster for the loss. But from then on , "add water" has been widely spread. When having made its way in Taiwan, the expression was directly translated into "灌水 (guàn shuǐ)".

"灌水 (guàn shuǐ)" and "拍砖 (pāi zhuān)" are expressions Chinese netizens contributed to the world Internet culture. With the features of being lively and humorous, these words have gained popularity among netizens worldwide.