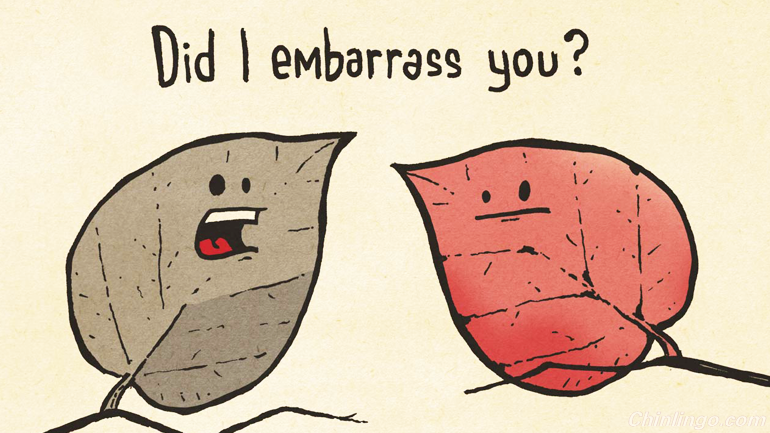 Euphemisms exist in languages to allow us to speak about conventionally taboo topics. When someone says "He's gone to a better place," "We had a talk with our children about the birds and the bees," or "I have a food baby," we understand that these euphemisms are not literal in English. They describe something else entirely—like death, sex, or in the last example, eating too much or feeling overweight.

It is especially important in Chinese culture to be wary of certain topics due to the emphasis on 留面子 (Liú miànzi – saving face). From preserving national face to personal interactions, Chinese euphemisms can help with saving your face.

Below are some common Chinese euphemism phrases you should familiarize yourself with to avoid unnecessary embarrassment and "save face."

One of the universally common topics where euphemisms are used is death. The literal translation for this one is "left the world," and is similar to the English equivalent of saying "She passed away."

(My grandmother passed away.)

A not-so-kind way of saying someone you dislike has died, the translation of this is "Gone to see Hades." This could be similar to the English euphemism "Burning in hell."

Translated as "Going to see Marx," this witty phrase has its origins in the history of communism in China. Starting out as a slang that Chinese communists used to refer to death, it is now relatively common and has a slightly humorous tone when used. A similar comparison to an English death euphemism would be somewhere between "He/she joined his/her ancestors." and "He/she went to meet his maker."

Similar to if you were to hear "I'll do away with you!," the term 干掉 is a death threat. You may hear this phrase appear in Chinese movies and TV shows.

送你上西天 translates to "Send you to Western Pure Land." In Buddhism, Pure Land is a place of bliss where people go when they die.

Sometimes this will be said in a joking way, in a fight similar to "I'll kill you!" (even when you do not literally mean it.) So don't be alarmed if you do hear this!

Literally meaning "self shortening," this is a gentle way to refer to suicide. An English comparison would be to say "She wanted to end her life" instead of "She wanted to kill herself."

(She wants to end her life.)

Similar to the above, 轻生 is another indirect way of saying suicide, and translates to "light life," as in someone values their life lightly enough to end it.

(He is thinking of suicide.)

This relatively new phrase, which literally translates to "dinosaur's sister," has gained popularity due to the Internet. Reserved for talking about ladies, it is a product of the phenomenon of online dating and the whole idea of meeting people for the first time after assuming how they look from pictures.

(Don't introduce me to an ugly girl!)

Now that we have picked on the ladies, here is a phrase for describing the unattractive men out there—in looks or personality. Similar to the English saying "you have to kiss a lot of frogs to meet your prince," in Chinese 癞蛤蟆 means "toad."

In historical Chinese times and in more recent events in China, being larger meant you had enough money to buy food. Someone with a larger built can be described as 富态 (fùtai) or "in a rich state," and to say someone has gained weight, you would use 发福了 (fāfúle). The literal translation to this is "Send blessings!"

Just as in the English "beer bellies," in Chinese you can use 啤酒肚 (píjiǔdù). Another way to say the same thing is 将军肚 (jiāngjūn dù), which translates directly to "General's belly" and 罗汉肚 (luóhàn dù), meaning "pork belly."

There is not a great euphemism for this in Chinese, but two nicer ways of saying someone is intoxicated is to simply use 喝多了 (hē duōle) or 喝高了 (hē gāole). The first literally means "drank too much," and the second, "drank high."

神经病 (Shénjīngbìng) is a play on words of 精神病 (Jīngshénbìng) by switching and replacing a character for a similar sounding alternative. This is not the nicest thing to say about people, and is often used as an insult. The English translation is "mental disorder."

Most euphemisms for mental illness in Chinese are negative, and are often used to insult others. The "politically correct" way to say it would be the above, 精神病 (jīngshénbìng). I am not advising you to use 神经病 (shénjīngbìng) or 脑子有问题 (nǎozi yǒu wèntí), but instead want to make you aware of these phrases in case you do hear it in a conversation.

脑子有问题 (nǎozi yǒu wèntí) means "the brain has problems," and depending on the situation can also mean someone who has done something stupid.

(Does your brain have problems?/Are you stupid?)

A way to say "fool," 笨蛋 (bèndàn) literally translates to "stupid egg." This phrase, along with 脑子进水 (nǎozi jìn shuǐ) are both seen as insulting.

This phrase literally means "water in the brain" and does not need to have much more explaining as to why it might come off as rude! It is usually used to describe an isolated situation, for example, someone who may usually be rational but suddenly started acting stupid.

(Water has entered her brain./She has done something stupid.)

出轨 (chūguǐ) is a subtle way to refer to infidelity as "derail" or going "off the tracks."

(She has gone off the tracks./She has had an extramarital affair.)

Meaning "new happiness," this phrase refers to a new lover. It can be seen as slightly more positive than simply saying "I cheated."

(I divorced because I have a new love.)

A slightly comical way of looking at extramarital affairs, 一人劈腿儿 (yīrén pītuǐ er) means that "someone has done the leg splits."

(Between the two of them, one of them did the splits./Between their relationship, one person cheated.)

Directly translated to "wash hands," this comes from the toilet being called 洗手间 (xǐshǒujiān), as in the washroom. This is an ambiguous term that simply means you need to do something in the bathroom, whether this be washing your hands or not.

A slightly more direct way of using the restroom, this translates to "relieve hands," and is the same as saying "relieve myself" in English.

A humorous way to describe something usually thought of as negative, 被炒鱿鱼 (bèi chǎoyóuyú) translates to "turned into fried squid."

(Yesterday, I was fried squid./I was fired yesterday.)

下岗 (xiàgǎng) is a subtle way to say "fired," and translates to "laid off." It is a polite way of referencing other people and is a nice phrase to use instead of 解雇 (jiěgù).

(They were both laid off.)

Instead of saying someone is jobless, 待业 (dàiyè) spins the same idea into a positive light of "waiting for work."

(These past few months, he has been waiting for work.)

Another nice way of saying someone is unemployed is 赋闲在家 (fùxián zàijiā), meaning "staying at home."

A little less positive than the two phrases above, but still not as direct as saying "unemployed," 家里蹲 (jiālǐ dūn) literally means "at home squatting." This has a undertone of laziness, compared to the other two more uplifting ways of saying "unemployed."

Of course, there are many other euphemisms for countless other topics. These are just a few common ones that you will hear around the street.

From the embarrassing to the taboo, these phrases can help you feel a little more confident when you are experiencing everyday situations in Chinese.

0 responses on "Advanced euphemistic phrases for awkward topics in Chinese"