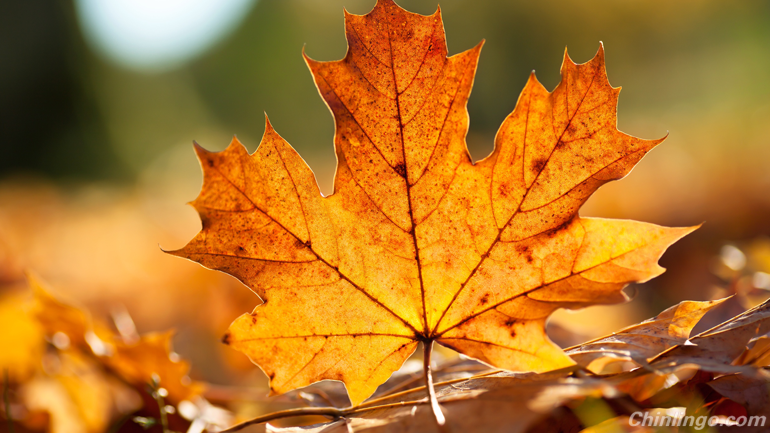 All over the world, different seasons bring to mind different emotions, senses and memories based on where we are from and where we've been. China with its vast lands allows nature lovers to experience four seasons in one day, but even among its many peoples, the autumn season engenders a variety of cultural connotations:

The original qiu character is a pictograph with a cricket on top as if going back to its nest underneath to avoid the autumn chill. This ancient connection is lost in its modern form: a "standing grain" on the left, with "fire" on the right.

Two solar terms mark the beginning (August 7-8) and ending (October 23-24) of autumn, as originally observed from the Yellow River valley. This may seem like an early start, but some begin to notice a slight chill in the nighttime air.

Besides pumpkins and fruits, crab is one of must-have seasonal delicacies which prompt its fans to ask one another: "Have you already had crab this autumn?" or "Do you like the males or the females?"

The term refers to the dryness felt in our skin and organs due to the seasonal drop in humidity. To counteract symptoms such as skin itchiness, dry throat or constipation try the following foods: pear, water chestnut, turnip, lotus root/seeds, spinach, celery, white fungus and honey, along with plenty of water, tea and soup.

Chrysanthemum tends to bloom in the autumn, when most flowers fade and dry. Chinese ink artists favor painting plums, orchids, bamboo and chrysanthemum.

Not an endangered animal species, the autumn tiger is a sweltering weather condition lasting a week or two after the start of autumn.

A withered vine, an aged tree, crows at dusk

a little bridge, a flowing stream, homes nearby

the evening sun sets in the west and

a heart-broken man wanders at the sky's edge

0 responses on "8 Chinese expressions for autumn"