Foreigners’ faux pas in Chinese learning: Too many words (part 1) 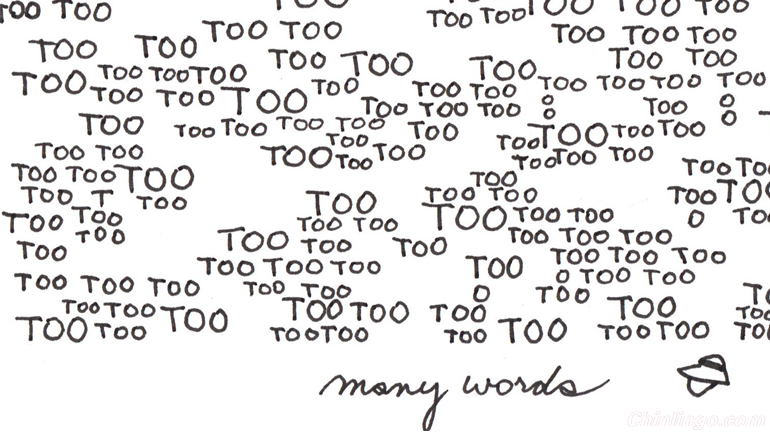 As you begin learning a new language, the most common problem you may encounter is the temptation to translate directly from your mother tongue, and end up saying things the same way essentially, just using different words. It is only when you pick up the natural rhythm and character of your new language that you can truly own it.

Those of us attempting to cross the wide chasm from English to Chinese are particularly prone to the mistake of using too many words, that, if not corrected early on, can easily become a habit that will keep us stuck in the 'outsider' zone forever.

The following examples are the sins I used to be guilty of until my kind friends, who could bear it no longer, pointed them out to me:

Using too many articles:

English is a language that enjoys differing word lengths, and so holds the potential for hours of fun alternating short and long words to create rhythm. In the same vein, we seem to feel the need to decorate our nouns with little articles: a/ an/ the.

Chinese, on the other hand, does not stand for such nonsense. Nouns are miraculously able to stand alone without any such articles around to support them.

The school has a shop, a canteen, a post office and a bank.

Using unnecessary articles can make you sound ungenerous when you have guests round:

A direct translation would be: "你想喝一杯茶吗?" (Nǐ xiǎng hē yībēi chá ma?), which sounds like you are limiting your guest to only one cup of tea. That's your lot, live with it.

A better way would be: "你想喝茶吗？"(Nǐ xiǎng hē chá ma?) as this holds the promise of fountains – nay – rivers of tea available to your guest.

It can also make you sound ungrateful on your birthday:

"My friend gave me a gift."

If you use '一份礼物', (yīfèn lǐwù), you will risk sounding disappointed that your friend gave you only one gift. What kind of a friend would do such a thing?

Do not be fooled into thinking that the Chinese '一个' is equivalent to the English 'a' –  in fact, it is more like the number 'one'. So the next time you find yourself searching for an article to precede your noun, just drop it – unless you need to emphasis the specific number of nouns, i.e. there is one, not two – only one:

The bedroom has one table, one chair and one bed.

(their) and 我们的(wǒmen de) (our). But don't fall into the trap of using 我的for every 'my' and 你的for every 'your'.

I have noticed that the 的 is most often dropped when referring to people, i.e.:

Because the possessive 的 is a separate word in Chinese, a sentence littered with 的's can be rather grating to the ears. So, instead of:

My friend left her umbrella at my house and took my umbrella instead;

you can leave out all but the last one:

or just drop the 的 altogether, not a problem.

If I had realised this earlier on, it could have saved me a lot of breath, but instead I spent my first few months in China labouring out very long sentences. Now, although naked nouns and short sentences still sound too empty to my ears, I am better able to refrain from adding lots of '一个's here and '的's there, and just surrender to the pragmatism that is the glory of Chinese.

In the next article I will give you more tips on how to speak as succinctly and abruptly as a true native speaker, but for now, feel free to share more examples in the comments section below.

0 responses on "Foreigners' faux pas in Chinese learning: Too many words (part 1)"