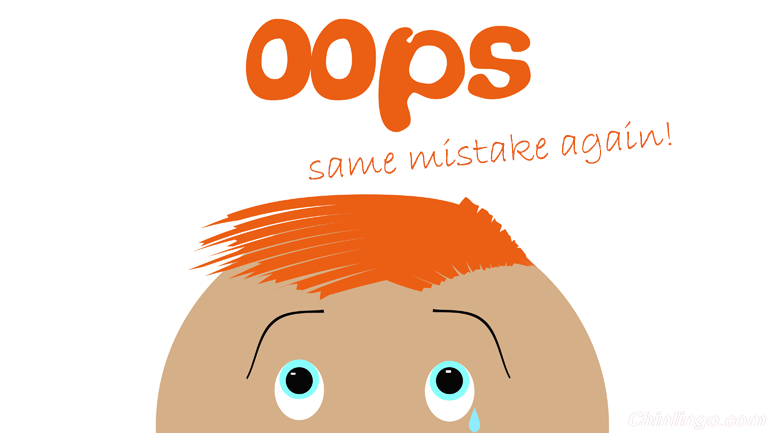 When you're learning a language, making mistakes is of course an essential part of the process. If you're studying Mandarin, then you've almost certainly made some of the learner mistakes below in your time. If not, then you've still got them to look forward to!

That said, the benefit of making mistakes is that you learn from them and avoid making more in future. This list of common Mandarin learner mistakes should help you iron out a few.

These are generally elementary to intermediate level mistakes. If you've hit an advanced level of Mandarin, then hopefully these shouldn't be much of an issue for you.

This is by far and away the most common kind of mistake. Mandarin's tones are a source of a lot of trouble for learners.

It can be easy to underestimate the importance of tones in Mandarin, but they really are essential. I'd go as far as to say that they're the most important thing to get right in pronunciation.

You can often get away with mangling up the vowels and consonants a little bit, but if the tones are out it just throws people off completely.

Learn the tones from the very beginning, and keep paying them the same attention you pay to vowels and consonants. I find that doing a lot of listening is a good way to get the right sounds hammered in.

和 being burntThe word "and" in English is very versatile, and this often causes English-speaking learners to latch on to 和 in Mandarin and use it for everything.

There's actually a wide array of ways to express "and" in Mandarin, all of which have different uses.

The main mistake with 和 is using it to connect phrases. English sentences like "I went to the café and ordered a coffee" can't be translated using 和. In those cases you actually don't need a connector at all.

There are numerous other ways that "and" can be converted into Mandarin. The main thing to remember is that you can't use 和 to link actions together.

Obviously Mandarin word order is a huge topic, but there is one particularly common mistake that's quite easy to clear up. English-speaking learners often put adverbials at the end of the sentence, when they should go before the verb.

In Mandarin this kind of information pretty much always has to go before the verb. Avoid the temptation to put it at the end of the sentence as this usually sounds a bit weird and confusing.

Back to the pronunciation! Tones are by far the most important part of Mandarin pronunciation, in my view. However, these are the consonants that learners struggle with most often, plus the tricky vowel sound ü.

The best guide to these sounds is probably the one at Sinosplice. They are hard, and the aspirated ones aren't the same as the unaspirated ones.

The ü sound is usually a bit easier to grasp. The trick is to start saying "eee" then close your lips as if you're making an "oh" sound. The ü should then magically come out.

Topic first, then commentA big feature of Mandarin sentence structure is that it is topic-prominent. This means that the most important item in the sentence should usually be put first, regardless of its grammatical role.

In other words, put whatever the sentence is about first (the topic), then add the rest of the information (the comment). This is very unlike English, which not only has to have a subject, but must also put it first in the sentence.

Adjectives in Mandarin are actually like verbs. They can be attached to nouns without a separate verb. As this is very different to many European languages, speakers of these languages often try to use adjectives with 是 (to be).

The most common way to link adjectives to nouns is with 很 . This is often described as meaning "very", but its main function in this case is just to sit between the noun and adjective. "她很高" can just be translated as "she's tall".

没有 + 了 in with line through them没有 is used to negate past actions, and 了 is used to mark completed actions. 了 grammar is confusing, so it's easy to mistakenly think that 了 is about the past tense.

This then leads people to use 了 in phrases with 没有. I've certainly done this more than a few times.

This doesn't actually make sense, as 了 is about completed actions. An action can't be completed if it was never done. 没有 alone is enough to express that something was not done.

As always, though, there's an exception to rule. 没有 also has meanings like "there are not" and "not have", and 了 can be used with these to express "there are no more" or "not any more".

了 just can't be used with 没有 when it's a negating a past action.

Once you've got 了 straightened out as a completed-action marker, there are further pitfalls waiting for you. A lot of learners assume that phrases like "我来了" and "我回家了" mean "I've arrived" and "I've come home".

This is because the 了 in these sentences is sentence 了, not aspect 了. Aspect 了 is the one that marks completed actions, whilst sentence 了 is for 'status updates'. It introduces a new situation.

To say that you have arrived, you need to use the actual word "arrive": 到. You then get "我到了" and "我回到家了".

吗 upside-downTwo common ways to form questions in Mandarin are positive-negative inversion, and adding 吗. After learning both, you can easily slip into putting both into one sentence, which is usually incorrect.

With positive negative inversion you form a question by adding a negative form of the verb right after it. Some examples:

Does he have a visa?

And forming questions with 吗 is famously easy: you just stick it on the end of a statement.

In most cases, using both these questions in one sentence is incorrect. Be aware, though, that sometimes it's actually fine. This happens when you're asking a question about a something embedded in the sentence. For example:

Do you know if he has a visa?

You could think of this sentence as involving two questions: does he have a visa, and do you know about it? Hence two question forms being acceptable in one sentence. Apart from this kind of sentence, though, only one question form should be used.

This one isn't about being vulgar. It's about putting unnecessary information in a Mandarin sentence.

Mandarin tends to be very efficient, and likes to leave the listener with a bit more work to do. Subjects can often be omitted, as well as any other information that's obvious in the context.

Something that a lot of learners do is include a lot of information that can actually be left out. Only including the essentials produces more elegant, functional sentences that sound more natural.

This is of course quite tricky to get the hang of, but paying attention to it in your studies is worthwhile.

Common mistakes on Chinese made by English speakers