Describe actions with “得” in Chinese 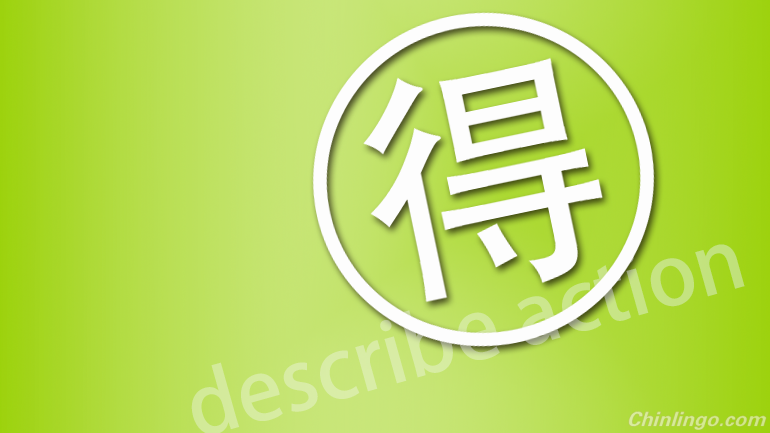 In English, when you want to describe an action, you can simply use an adverb. For example, I run quickly. I get up early. Unfortunately, though, using this "verb + adverb" structure in Chinese is much more complicated. Today, we will focus on getting the hang of how to describe verbs with an adverb in Chinese.

The key word for this structure is the particle word "得(de)". Look at the following sentence:

In these situations, it appears quite similar to English. All we have to do is use "得(de)" and "很(hěn) after the verb.

Rule one: If there is no object in the sentence, the structure is:

But what if we would like to use object with our verb? After all, I don't eat slowly all the time – what if I only eat fish slowly? Then, the sentence turns into: 我吃鱼吃得很慢(wǒ chī yú chī de hěn màn)-Let's take a look at a few more examples,

Rule two: If there is an object in the sentence, always do this:

So far, so good, right? Congratulations! If you master these two rules you'll be correct in 70% of situations! But what about the other 30% ? Read on.

我睡觉睡得很好(wǒ shuìjiào shuì de hěn hǎo)。I sleep well. If you look at this sentence, you will find although 睡觉(shuìjiào) is known as one word "to sleep" and there is no object in it, it doesn't fit the first rule: it's not 我睡觉得很好(wǒ shuì jiào de hěn hǎo) . This is because we have one final rule to learn:

Rule three: For some two-character verbs, the structure is:

Though this rule is not hard to understand, there's no shortcut to learn which verbs are in this special type of 2-character verb. My best suggestion is learn them one by one. Here are some common ones:

生气(shēng qì) to be angry

One tip: Don't be upset if you can't remember them all at first. Even if you just use 我跳舞得很好(wǒ tiàowǔ dé hěn hǎo), most Chinese people will still understand. Be brave, and start practicing describe actions with 得(de). The more you practice, the better you will be!

0 responses on "Describe actions with "得" in Chinese"