What does number “九” mean to Chinese people? 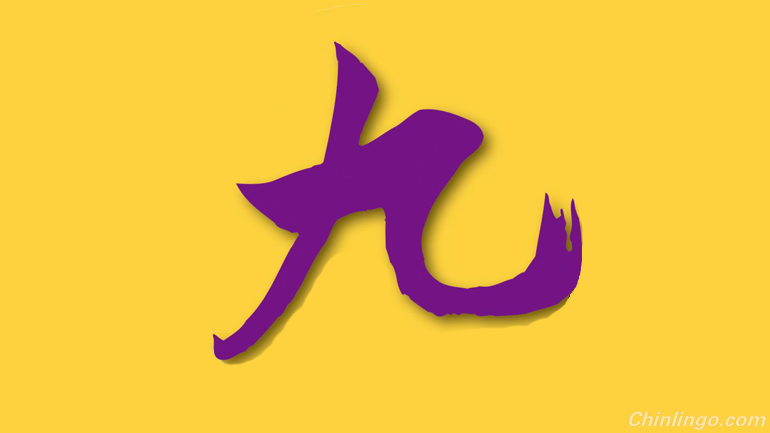 Sept. 9, 2009, a once-in-a-century lucky day for Chinese people, is an ideal day for a wedding. The number "九 (jiǔ)" that appears three times on this date stands for lasting love, as it sounds similar to "爱你久久久 (ài nǐ jiǔ jiǔ jiǔ)", literally means "love you forever" in Chinese.

The number "九 (jiǔ)" has long been admired by Chinese people. "九 (jiǔ)" is the biggest cardinal number and is pronounced the same to the "久 (jiǔ)" from Chinese word "长久(cháng jiǔ)", which makes it mean auspiciousness, safety and smoothness in traditional Chinese culture. Ninth day of September in the Chinese lunar calendar, known as the Double Ninth Festival (重阳节-chóng yáng jié) in China, which has two "九 (jiǔ)" in that date with an uncommon meaning, and that is why this day is regarded as the festival for recalling ancestors and honoring the elders. Since "九 (jiǔ)" possesses such special meanings, it is expected to bring good luck to people both in lunar calendar and solar calendar. Chinese people are fond of such lucky dates, and they pick this kind of day to hold ceremonies, feasts or get married as mentioned above.

"九 (jiǔ)" is not only a figure, but also stands for one kind of philosophy thinking. In Chinese Yin-Yang and Five Elements (阴阳五行-yīn yáng wǔ xíng. The ancient Chinese Yin-Yang scholars believed that there are two natural, complementary and contradictory forces in our universe. These scholars also believed that our universe consisted of five basic elements, which are metal, wood, water, fire and earth. Everything, including humans in the universe must have a relationship with these five elements.), "九 (jiǔ)" is the biggest yang number which symbolizes "heaven (天-tiān)". According to the Chinese legend, "天 (tiān)" consists of nine regions and the ninth one is the highest one. The word "九州 (jiǔ zhōu)", as you might have heard of before, is the title for ancient China. There are many Chinese idioms containing the character "九 (jiǔ)", and you can sense the meaning in these idioms. For example:

九霄云外 (jiǔ xiāo yún wài, be flung to the four winds; to loose ones way)

九九归一 (jiǔ jiǔ guī yī, when all is said and done in the end)

九泉之下 (jiǔ quán zhī xià, down in the Nine Springs; after death)

Nowadays, the most admired number for modern Chinese people must be "八 (bā)". However, ancient Chinese people showed no less adoration to the number "九 (jiǔ)".

0 responses on "What does number "九" mean to Chinese people?"