How about learning some Chinese for Qixi Festival? 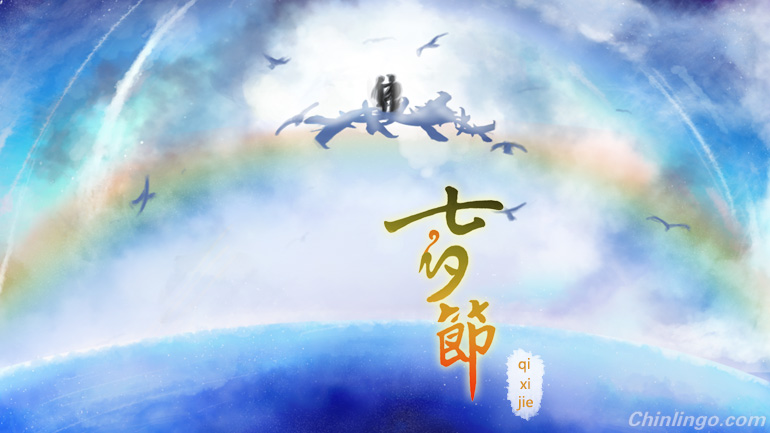 The Qixi Festival 七夕节 (qīxījié) celebrates the annual reunion of two legendary lovers and has therefore also been called Chinese Valentine’s Day. Directly translated, the name means “Seven Night Festival” and it occurs once every year, on the seventh day of the seventh month in the lunar calendar. Therefore, the date according to our calendar varies. For instance, in 2014, the Qixi Festival falls on August 2nd, in 2015 on August 20th and in 2016 on August 9th.

The Qixi Festival has been celebrated since the Han dynasty and before the introduction of Valentine’s Day, it was the major romantic festival in Chinese society. In recent years, the Festival has grown in popularity and old customs are mixed with modern commercialization, prompting young lovers to buy each other gifts and show their affection.

The story of the Cowherd and the Weaver Maid

The story of 牛郎 (Niúláng) “the Cowherd” and 织女 (Zhīnǚ) “the Weaver Maid” is a well-known story about love between a fairy girl and a mortal man. The Cowherd lived a lonely life and often lamented this in front of his ox, his only companion. The ox told him to go to the riverside, where he saw seven fairies bathe. He stole one of their dresses left lying on the beach, and when they had finished bathing, the youngest fairy couldn’t find her clothes, without which she could not return to heaven.

The Cowherd stepped forward and gave the dress back to her, but also asked her to stay with him.

She accepted and they lived happily for many years and had two children. When the Queen of Heaven discovered what was going on, she forced the fairy girl to return to Heaven and her old duty of weaving colourful clouds.

Back on Earth, the Cowherd was of course very sad to have lost his wife. This time, the ox guided him again, telling him that he had to slaughter the ox and use its hide to gain access to heaven. With much regret, he slaughtered his old friend and went to heaven with his two children to look for the Weaver Maid.  This wasn’t tolerated by the Queen either, who used her hairpin to draw a line in the sky to separate the two lovers forever. This can be seen in the night sky as the Milky Way (银河 yínhé), and the Cowherd and the Weaver Maid are both represented by bright stars on each bank. The lovers can only meet once every year, on the seventh day in the seventh month, when magpies form a “Magpie Bridge” (鹊桥 quèqiáo) over the river so that they can be together for one single day.

Love is a very powerful motivation for learning a language, but even if a romantic relationship with a Chinese person isn’t on the menu, there are still a lot of things you can learn. First, you should have a look at some basic love vocabulary (click here) to make sure you know the basic words.

Apart from that, there are many versions of this story available for free online. Read one of them! Since you are already familiar with the outline of the story from above, reading should be a lot easier. Naturally, since this is a legend, there are many variants, so don’t be confused if the details vary. You can also practice your listening by watching an animated version of the story.

0 responses on "How about learning some Chinese for Qixi Festival?"