5 tips for learning Chinese with radicals and components 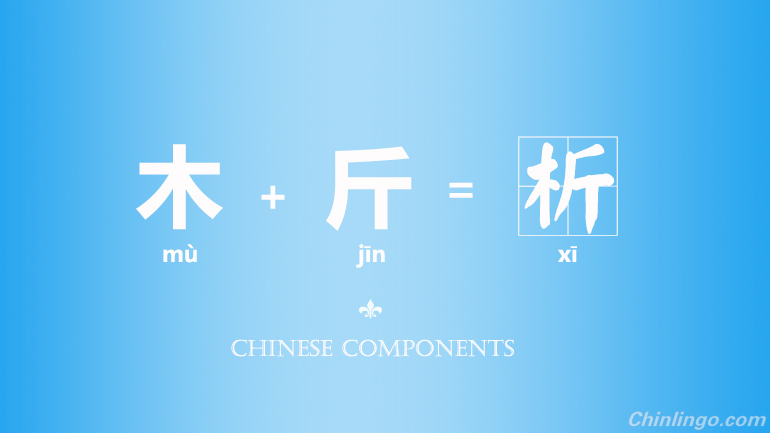 Although there is a vast variety of characters, most characters are made up of existing characters arranged in a novel combination. You intermediate learners probably already know what's what.

In each character, there are often components which have individual meanings. These will furthermore be referred to as  "radicals" (偏旁) and "component characters." For the purposes of memorization, it can be helpful to think of each radical as representing a basic idea. It is one basic character which cannot be simplified any further. Radicals were used to organize dictionaries long before Romanized systems based on pinyin were invented, and they're still super useful in guiding Chinese language learners nowadays.

Once these radicals are combined, they will create a new idea in the form of a new Chinese character. A character which is found within a more complex character is known as a component character.

1. Break the characters down into components.

This example will use three radicals:

木 This character means "wood" and looks just like a little tree. It is pronounced mù.

斤 This character is an old word for "ax head." Can you see the resemblance? It is pronounced jīn.

日 This final character means "sun," and, by extension, "day." It is pronounced rì.

Now, if we combine the first two characters ("wood" and "ax"), we have this new character:

This character means "to separate," and, by extension, "analyze." The signs for "wood" and "ax" are quite clearly mashed together here. How can we use our knowledge of components to efficiently memorize this character?

And, furthermore, how can we memorize more complex characters that include the "separate" characters? For example, it appears as the second character in the modern Chinese word for "analyze": fēnxī 分析. To answer both these questions, move along to the next step.

2. Visualize the characters in your mind.

Using a component-focused mnemonic technique, we can create a strong association between the character for "separate" and its component characters. In our memories, we can combine this character with an idea of someone hitting wood with an ax, separating pieces of wood. The characters for "analyze" could be remembered by visualizing a cut tree and the rings inside the tree, which are used to analyze the tree's characteristics.

Creating imaginative visualizations can lead to more effective learning. This is a great way to get yourself off the ground in terms of reading. Next time you see this character, you'll be able to break it down and recall its meaning. The more vivid your visualization, the more effective the technique will be.

3. Build from your previous knowledge.

We can go steps further as well. After a while of looking at the "separate" character and conjuring up your mental imagery, you'll get the meaning down pat. With enough practice, you'll simply glance at the character and know the meaning without going to your mnemonic technique.

The character 日, meaning "day," has been added to the character for "separate." In very old literary Chinese, this new character means "clear" and, by extension, "easy to understand." In modern Chinese, it is used in the word for "lucid": míngxī 明晰.

We can apply our same techniques here. We can either split apart the character into three distinct radicals (木, 斤 and 日)  or we can split this character into the radical 日 and the character 析. Since we have already memorized the latter character, let's create an image from just two components. Picture the tree cut, with its rings showing for analysis. Now add some sunshine. The sun in the highest point of the sky, shining light onto the cut tree to help with the analysis process and bring about a more enlightening understanding of the tree. Again, stronger images lead to more effective memorization.

This ain't all about pictures and characters. When you learn a character you need to know more than its general meaning – you need to learn how it is read.  Definitions are only half of the puzzle, and only with the pinyin will you have the full picture. Luckily, similar mnemonic techniques relating to association and visualization can be applied here. This goes hand-in-hand with remembering pronunciations, so look to the following step to see how pinyin can be logged away in your noggin.

5. Get the pronunciation down.

With some imagination, we can also associate the pronunciation of the character with the visualizations we have created.

Sounds kind of silly, right? You would be surprised, but the sillier the story is the better you will hold onto the pronunciations.

As you continue to study Chinese, you will likely find these mnemonics less and less necessary. You will start to recognize the characters and sounds thanks to hearing and reading them in association over and over again. When you are just starting out though, it can be helpful to incorporate funny techniques like this into your flashcards and space repetition software. You won't have to invent wild stories forever – usually after you've remembered the character a few times through this method, you will start to recall meanings and readings less and less hesitation.