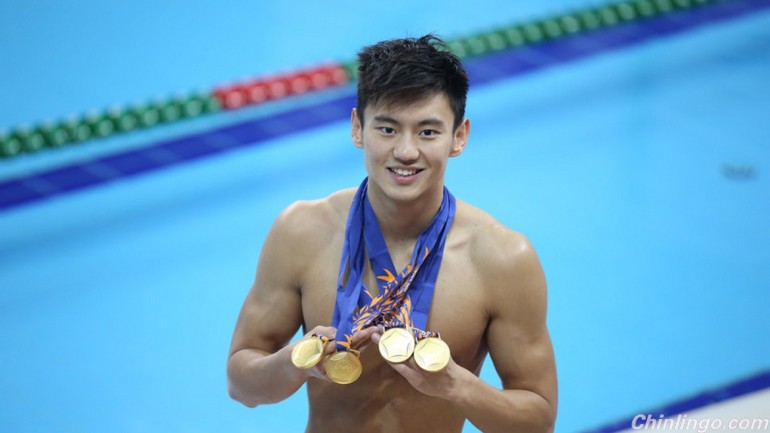 On Thursday, Ning won gold in the 100-meter freestyle at the 2015 FINA Swimming World Championships in Kazan, Russia.  His 47.84-second swim made him the first Asian to win a medal in the 100-free at the championships.

Another impressive metric: The hashtag "Ning Zetao makes history" on China's Weibo social-media network racked up more than 66 million readers, according to the service.

The 22-year-old from Zhengzhou in Henan province is filling up some of the celebrity sports space left by Li Na, China's tennis superstar who retired last year after winning the Australian Open, and who gave birth to a baby girl in June. Ning, a lieutenant in the Chinese navy, quickly became a popular figure on Weibo, attracting a swath of ogling admirers.

One of CCTV's host wrote on his verified account, "he is the husband in everyone's dream." Referring to the Facebook-like social-media function of the popular social-media app WeChat, he added, "all women went crazy overnight, and pictures of all angles of his abdominal muscles swept my WeChat Moments."

Another user wrote, "He could have lived on his good-looking face and body, but instead he chose to live on his talent and hard work. A thumb's up!"

The swimmer – whose chubby cheeks have led him to be called xiaobaozi, meaning "little steamed stuffed bun," by admirers and even by himself on his social-media accounts – has become an object of intense speculation online.

On Friday, two topics with Ning's name made the top 10 of Weibo's hot-search list: "Ning Zetao's Girlfriend" and "Ning Zetao and Son Yeon-jae" – the latter a Korean gymnast whom expressed her admiration for Ning on a talk show last year, after the Chinese swimmer came into the spotlight at the Incheon Asian Games. Some users speculated whether Ning and Son were together, though others were quick to point out Chinese military marriage rules forbade military personnel from marrying foreigners.

By 2:30 pm, there were more than 100,000 web users who posted selfies, alongside the "Ning Zetao's Girlfriend" hashtag, claiming they were Ning's girlfriend. Photos of Ning's six-pack abs were widely circulated, along with comments saying it would be best if he remained shirtless.

"We call handsome boys little fresh meat," wrote another Weibo user, invoking a common piece of Chinese slang. "But for special ones like Ning, he should be called little fresh fish."