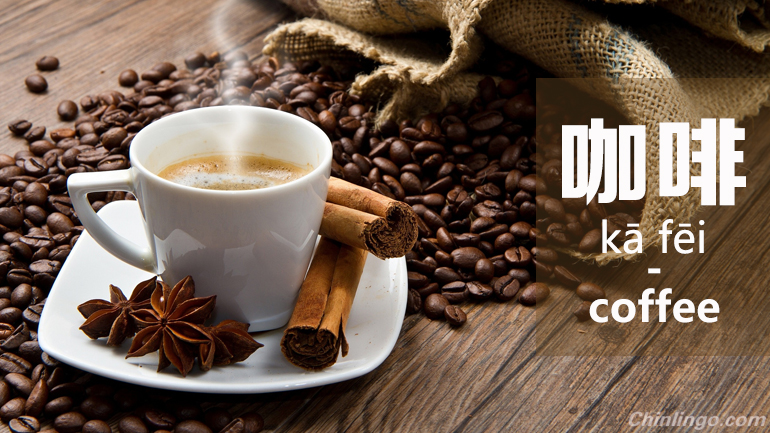 Learning Chinese can be tricky, but fortunately there are many loan words shared between English and Chinese! Unlike foreign companies that choose a Chinese name in order to break into the Chinese market, these are words that have long been accepted into Chinese dictionaries and the vocabulary of native speakers.

Whether they originated from Chinese to begin with, or were adapted from English words, check out our list of 8 English words that sound quite similar to their Mandarin Chinese counterparts!

Coffee was not introduced to Asia until the late 19th century, and has only been popular in China during recent decades. The Chinese were first exposed to coffee when a French missionary brought coffee seedlings to Yunnan. While plantations existed for almost a century, the drink did not become popular until the 1990s. When the coffee trend first spread to Shanghai, many Chinese people disliked the bitter taste, with some saying that it reminded them of cough syrup. However, as Western cuisine became more prevalent in China, people began to accept and like the taste of coffee more. Today, many cafes, restaurants, and bakeries that serve coffee can be found all over China, and coffee-related loan words have expanded to include: latte (拿铁, ná tiě ) and cappuccino (卡布其诺, kǎ bù qí nuò).

China has a complicated relationship with golf, with a history of the sport being banned due to it being too expensive and extravagant. Golf actually has many similarities to Chuiwan (捶丸, chuí wán), a stick and ball game played in ancient China that peaked in the Song Dynasty and declined in popularity after the Qing Dynasty. Golf was banned in China up until the mid-1980s, but construction of new golf courses are still difficult today due to legality issues. Despite the bans and closure of illegal golf courses, China’s Hainan province harbors a growing golf industry. China is also home of the largest golf facility in the world, the Mission Hills Golf Club.

The word "hacker" has an interesting transliteration in Chinese; it can correspond to two phrases: 黑客 and 骇客, which were originally two distinct definitions of "hacker" in Chinese. 黑客 originally referred to senior programmers, while 骇客 referred to malicious security crackers. However, as cybersecurity attacks became increasingly prevalent in the internet age, the two terms have often been used incorrectly by the press due to the similarity of the phrases and the association of "黑", which means "black," with "malicious." To this day, the two terms are still used interchangeably in Chinese media despite the blurred meanings.

As American fast food restaurants began expanding to Asia in the 1980’s, China’s definition of 汉堡 grew to encompass all types of sandwiches made with round buns. Burgers in America are dominated by beef, while burgers in China include pork, chicken, or fish patties just as often. Some burger chains in China also serve variations or cultural fusions of the traditional hamburger, such as rice buns or packaged sandwiches containing only a thin slice of meat inside.

Tofu, which translates to "bean curd", is a key ingredient in many Chinese dishes. It is made from coagulating soy milk into curds, which are then pressed into blocks. Tofu originated from ancient China around 2,000 years ago, with various theories about how it was invented. It eventually spread to other parts of Asia, and then to the West. The English word is borrowed from the Japanese word tofu, which comes from the Chinese equivalent, dòu fu.

A typhoon is a tropical cyclone that occurs in the the North Pacific Ocean. The word comes from 台风, which originated from the Cantonese pronunciation of 大风, meaning "big wind". Typhoon season in China spans the summer months, and the windstorms occur on the coast and spread inland. Common characteristics of typhoons include a strong winds accompanied by heavy rainfall for a short period of time, from a few hours to a few days. On severe typhoon days, school and work are often cancelled.

This adorable little dog breed is named after its lion-like appearance. "Shih tzu" is a romanization of 狮子 (shī zi), which literally means "lion" in Chinese! 狮子犬 may also refer to the chow chow, another dog breed that resembles a lion. In Chinese, the Shih Tzu is now formally known as the 西施犬, named after Xi Shi, a legendary beauty of ancient China. The Shih Tzu also has another nickname: 菊花狗, or "chrysanthemum dog".

Commonly known in English as a slang term for peacefulness and relaxation, Zen originated from a school of Chinese Buddhism that emphasizes the practice of meditation as a way to achieve insight and enlightenment. Zen originated in 6th century China, where it gradually spread to Vietnam, Korea, Japan, and then the West. Zen meditation is often practiced in the sitting position with a focus on clearing the mind by focusing on counting breaths or channeling inner energy.

Now that you know these loan words, maybe learning Chinese won't be so daunting!

0 responses on "8 English words that sound similarly in Chinese"