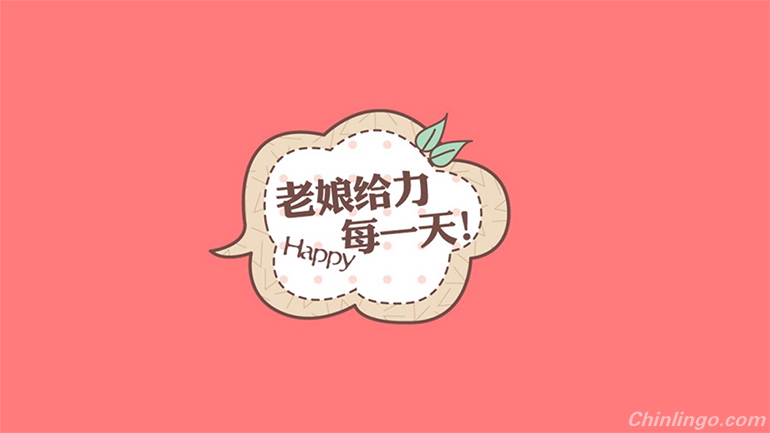 Chinese Internet slang is an informal language coined to express ideas on the Chinese Internet in response to events, the influence of the mass media and foreign culture, and the desire of people to simplify and update the Chinese language. Slang that first appears on the net is often adopted to become current in everyday life. It includes content relating to all aspects of life — social, mass media, economic, and political etc. Internet slang is arguably the fastest changing aspect of the language, created by a number of different influences — technology (the means used to input and send messages), mass media and foreign culture amongst others. When talking with native Chinese people, don't get confused by some new words and phrases. Actually, they are buzzwords in recent years in China.

In China, a red envelope (红包) is a monetary gift which is given during holidays or special occasions such as weddings, the birth of a baby or graduation. The red color of the envelope symbolizes good luck and is supposed to ward off evil spirits. The amount of money contained in the envelope usually ends with an even digit, in accordance with Chinese beliefs; odd-numbered money gifts are traditionally associated with funerals. The contemporary usage of red envelopes have seen the adoption of digital technologies such as mobile applications, with businesses competing for a share of the new consumer market.

A red envelop is a gift containing some money. It is used to express your good wishes to others.

I got my wish! I got the biggest red envelope ever.

In spoken Chinese, "真牛" means "terrific!", "awesome" and "great". It's a way to compliment someone that is really excellent.

"拗(niù)", the phonetic loan character of "牛(niú)", is from Shandong dialect. "拗" means stubborn. Shandong people used to cite this word to describe a stubborn person that cannot change his attitude or position on something. That’s quite similar to "牛" (cattle), which doesn’t change position when it is tilling. But why does "牛人(niú rén)" refer to an excellent person? The story can date back to the 1950-1960s, when being a skill worker was a hot profession in Liaoning province, a famous industrial province in the northeast China.  A person without dedication and stubbornness cannot be an expertise in the technological field, that's why "牛" is endowed with the meaning of "awesome".  In this way, these skilled workers initially represented those who are outstanding in his field, and "牛人" has been used to refer to outstanding people since then.

A: My friend got an offer from Peking University.

It means 'great', 'cool', 'powerful' or 'incredible'. Its antonym is "ungelivable".

"Gei" means "give" in Chinese, while "li" means "power, strength or energy". Literally, it means "giving power," but is now widely accepted as an adjective describing something that's "cool."

This is the latest episode in the ever-increasing popularity of this completely new word which has also been given English and French translations by web users and a negative form in a manga animation.

But it was the word's antonym "bugeili" – meaning dull or boring – that first grabbed wider public attention after it appeared online in an episode of a Chinese-dubbed Japanese comic animation.

A: I got the first prize in the Chinese Bridge Chinese Proficiency Competition yesterday.

"吐槽" is a term originated from Japanese まんざい (manzai) describing the exposure of unreasonable behaviors or expressions in a humorous way. Although it can be used to mock, satirize, complain and abuse someone or something, people usually use it to criticize others and express one’s aspiration.

He is a man who complains a lot.

Give sb. a hard time 挑剔，找茬：

He always gives me a hard time in public.

He always corrects me when I do something wrong.

Leave me alone, I was just bullshitting.