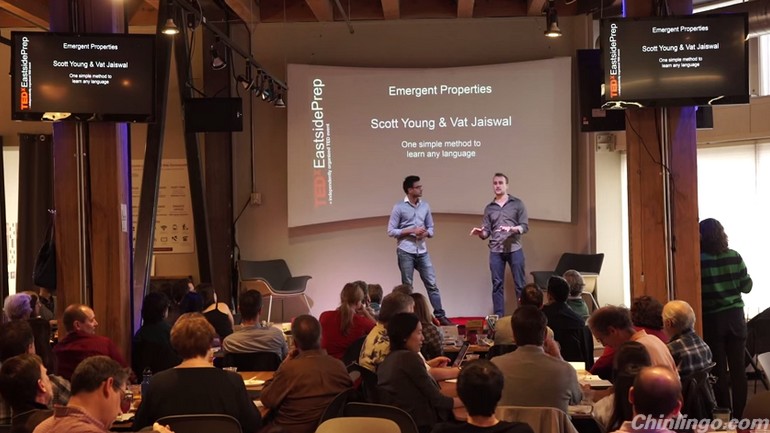 Scott Young is a blogger, speaker and author. He previously spoke at TEDx EastsidePrep about his project “The MIT Challenge” to self-test MIT’s undergraduate computer science curriculum in one year, using their freely available information. His most recent project was with Vat Jaiswal, traveling to four countries, learning languages, with the goal of not speaking English for an entire year.

Vat Jaiswal is a graduate student, aspiring architect and filmmaker. His most recent project was with Scott Young on The Year Without English, where he traveled through Spain, Brazil, China, Taiwan and Korea creating four short documentaries on language learning and cultural immersion.

This talk was given at a TEDx event using the TED conference format but independently organized by a local community.

Scott is fluent in Mandarin Chinese and in several other languages, and is always sharing tips and suggestions in his blog about how to learn Chinese.

Here are a talk about his Chinese learning:

1. How can I learn Mandarin Chinese quickly and without too much stress?

The quickest way is simple: go to a country which speaks Chinese, commit to speaking only in Chinese for the duration of your stay and commit a good chunk of your time each day to studying the basics. That’s what Vat and I did during our project learning Chinese over three months. I can’t say it’s not without any stress, but the pace means you can get to a level where conversing with Chinese people is possible in a matter of months, instead of years.

2. In your view, what is the best way to memorise Chinese words and/or characters?

The second best way is to use spaced repetition software. I had a lot of success using the Mastering Chinese Characters series available with Anki, because they have full sentences with audio helping understand the components of speech.

3. Is there an easy way to learn how to read Chinese?

Graded readers are really good. Chinese was the first language I tackled where reading native material was extremely difficult even when I could converse comfortably. Even when you can start reading, the difficulty may be so high that it’s not fun. And when it’s not fun, it’s less likely you’ll actually do it.

I think the Mandarin Companion Series by AllSetLearning are quite good beginner books to help build some basic reading skills without getting overwhelmed.

4. What about learning to write Chinese characters, do you feel that’s worthwhile?

It’s definitely worthwhile, but maybe less so in an age dominated by digital input. I had to learn some basic character writing to take the HSK 4 when I was in China, but I’d rather focus my efforts more on getting to a strong reading and writing ability before moving to handwriting.

I think if you are serious about learning Chinese, learning to handwrite the characters should also be on the to-do list. However, it’s a matter of when they should take priority. My sense is that, beyond knowing basic stroke order and radicals, memorising how to write the less frequent characters is something that should come after reading, listening and speaking abilities are already quite far ahead.

5. For beginners, in your opinion, what are the best ways and best tips to learn Mandarin Chinese or other languages in general?

Pick a partner and commit to speaking to them in the language you’re trying to learn. It can be a scary step, but nothing else I’ve found gets through that initial awkward phase of not being able to speak the language.

6. In your view, how long does it take to become fairly proficient conversationally in Chinese?

The term “fairly proficient” is inherently quite subjective, so it makes it a hard question to answer in a way that will satisfy everyone. I did another interview about my experience learning languages, and when I said I could comfortably have conversations with locals, the interviewer took that to mean I had just learned some set phrases for ordering food at a restaurant or taking a taxi. Yet I’ve had other experiences where people are disappointed when you can’t fully follow a group conversation even though you’re fine in one-on-one interactions, so people all have different definitions of proficiency.

7. What are the most common Mandarin Chinese mistakes made by English speakers?

Not learning the pinyin and tones properly is one of the most glaring. I think it deserves isolated practice from the very beginning. This is particularly true if you’re learning through immersion because few Chinese speakers have entirely standard pronunciation, even though most readily understand it because of its status in media. Neglecting the standard pronunciation may be okay for native Chinese speakers, but it adds an extra layer of comprehension difficulty when you already have a foreign accent.

The second biggest problem is word order. Chinese grammar isn’t too difficult, but because there are fewer markers to indicate nouns, verbs, etc. it’s even more important to get word order correct.

Finally is word usage. I often found it frustrating how words rarely had a one-to-one translation from English to Chinese. This could create difficulties, since using the wrong word for the context often made a sentence incomprehensible to native speakers, even though it came straight from the dictionary. The solution is to ask people a lot what word they would use and pay attention to the fact that translations aren’t always 1-to-1.

8. If you suddenly forgot how to speak Chinese, and needed to learn the language again from scratch, how would you go about it?

No restrictions? Book a ticket to China in a northern part where the local accent is standard. Commit to not speaking English while I’m there. Get 2-3 local tutors who also speak some English to study with every day. Pick people I could also be friends with so I can try to integrate myself a bit into their social networks to avoid the common symptom of surrounding yourself with other English-speaking expats.

That’s pretty much what I ended up doing, although I lived in the southwest city of Kunming which was lovely, but is a little harder to immerse with the locals because of the deviations from Beijing Mandarin.

If I couldn’t travel and couldn’t study full-time, I’d set up tutoring sessions through iTalki.com and spend as much of my spare time as possible with Chinese people, practicing. It would take longer, because the immersion isn’t 100% and it’s harder to do intensive studying when you’re juggling another full-time occupation. However, I think if I was regularly engaged in conversation and partial immersion, it might be possible to do the same as in China, albeit a bit slower.

The Year Without English is an experiment in travel and language learning to see how much you can learn simply by not speaking English. Click to see more details when they traveled in China: