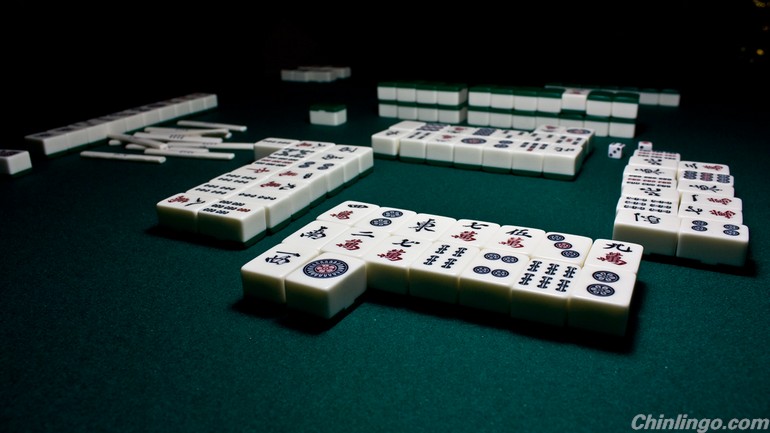 Once you have the basic numbers, down, you’re ready to play 麻将 (májiàng) or Mahjong as it’s often spelt in English, a game which is extremely popular in most Chinese speaking societies and beyond. It’s also fun and teaches you a bit about Chinese culture at the same time, knowing how to play the game will also be much appreciated by native speakers. Although you can play for money, the games work equally well without doing so.

Apart from the numbers 1-9, you only need a handful of words and most of them are useful outside the game as well. I have played in Chinese with people who don't even study Chinese, so it’s definitely doable. From a language point of view, playing mostly consists of naming the tiles you play and, sometimes calling an action based on what someone else just played. Naturally, Chinese people tend to talk a lot while playing the game, but most of this isn’t related to the game or isn't strictly necessary.

The rules of the game

I’m not going to give a detailed description of how the game is played, but if you think of it as a card game, it becomes much easier. The game is played by drawing one new tile each round, then discarding one. Gradually, you upgrade the tiles you have on your hand until all tiles are part of different sets of three or four. The first person to combine all his or her tiles in this way wins.

I’m not going to go into scoring here, because there are so many different variants that it would make little sense. I have played the game many times with different native speakers, and even though the basic premise of the game stays mostly the same, the scoring system can be completely different. If you care about games in general, this is frustrating, because changing the scoring system obviously changes the way the game ought to be played.

The vocabulary you need to play

Below, I have included the basic vocabulary you need to play. There are of course more useful words than these, and there are also variants of some of them, but this is just meant to get you started, not teach you everything there is to know. There are also regional variants, so don’t be surprised if this list isn’t identical to what you have heard or what your Chinese friends teach you.