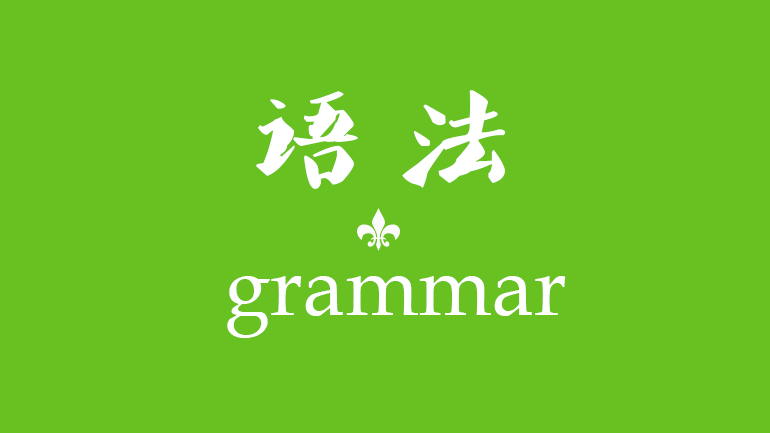 Whilst it's important to learn grammar in detail in small chunks, it can be very useful to get familiar with some general Chinese grammar rules. These aren’t specific grammatical structures, but general facts about the Chinese language that apply in most cases. They can help you get a feel for Mandarin Chinese and how it works.

Rule #1: What precedes modifies what follows

This rule sounds a little bit complicated when you first see it, but it’s actually quite straightforward. It simply means that modifiers come before the thing they modify. The Chinese language, right through from the written classical language to the modern spoken vernacular, has always had this rule.

Let’s look at some simple examples to demonstrate this rule.

She can drink a lot of beer.

Knowing about this ‘modifiers first’ rule in Chinese grammar can be very helpful in the early stages of your Chinese studies. It lets you follow the structure of sentences more quickly because you can identify modifiers (adjectives and adverbs) and the things they’re modifying (nouns and verbs) more easily.

Rule #2: Words do not change

Unlike in European languages, words in Chinese do not change. They have a fixed form that is the same no matter what they’re used for or where the appear in a sentence. In Chinese, you don’t conjugate verbs and you don't make adjectives agree. According to Chinese grammar rules, a word is a word.

Have a look at these examples that illustrate this point:

She goes to work.

They go to work.

We go to work.

These simple sentences show that verbs do not change in Chinese, whereas they do in English. The verb 去 (qù) is the same in every sentence and doesn't change. These sentences would be even more varied in a language like French, but in Chinese the verb is the same every time.

It's not just verbs that never change according to Chinese grammar rules. Adjectives are also fixed in their form and are the same no matter what noun they modify. Let's see some examples:

This is a black car.

I saw some black cats.

This is a black shirt.

The adjective in these sentences, 黑色的 (hēisède) , is the same for each of the items. There is no gender or grammatical number in Chinese grammar rules.

If you haven’t studied grammar before, you might not be familiar with these terms. The subject in a sentence is the thing that performs the action of the verb. The subject of the following sentences is colored red:

Because Chinese is topic-prominent, it’s often possible and very natural to put the topic first in a sentence rather than the subject. It is also possible in English, but it sounds much less natural, as you can see in the following examples:

France, I haven't been to.

The sentences above are perfectly permissible according to Chinese grammar rules, but quite odd in English. Note that you could also form the Chinese sentences with the subject first and they would be just as grammatical.

Also notice that the last sentence doesn’t include the subject (you) at all. This is possible because Chinese grammar is primarily interested in the topic (a pen) and not the subject.

Again, you might not be aware of what these terms mean. Tense is about when an action took place relative to now, when we’re speaking. Aspect is about the completeness of an action relative to when it took place. Have a look at these two sentences in English to see the difference:

I will set off to Beijing.

I will have set off to Beijing.

How Chinese marks for aspect is difficult and quite complex. It revolves around a few particles, most importantly 了 (le), but we won’t go into details of that here. The lesson here is to bear in mind that Chinese doesn’t mark for tense, but it does mark for aspect. This will take some getting used to, but you will get there eventually!

Finally, we come to the most general rule about Chinese grammar. One of the joys of studying Chinese is that on the whole it’s a very logical, consistent language. This is very true in Chinese vocabulary, as you can usually see very clearly the logic behind most words. It’s also true in Chinese grammar rules, which tend to be consistent and reusable once you’ve learned them.

One example of this is that Chinese tends to only indicate things once in a sentence. For example, if the time has already been made clear, it doesn’t need to be indicated again. Similarly, the number of a noun only needs to indicated once in most cases. More of these examples crop up as you get further into the language. Try to bear this point in mind and you will often find that you can guess how to say new things with some accuracy.