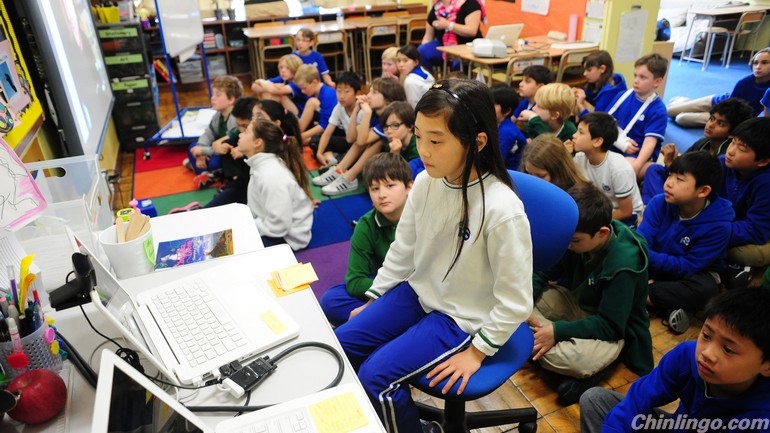 A shortage of Chinese language teachers in Australia has forced more than 50 schools to employ educators from Beijing to teach their Mandarin classes via online communication app Skype.

Forty-two of the 54 schools using the program are based in the state of Victoria, as a result of a plan implemented by the previous state government which decreed that all elementary school students had to be learning a second language by 2015.

But a shortfall in the number of Chinese teachers available has forced schools to turn to online, Beijing-based educators to teach children Mandarin.

The program, known as My Chinese Teacher, was created more than four years ago by Tom Shugg, an Australian living in Beijing. It sources suitable teachers for schools in rural areas of Australia that would otherwise struggle to find a second-language teacher.

Mandarin, in particular, is becoming increasingly popular among Victorian students. Figures show the number of primary and secondary students enrolling in Mandarin increased by more than 11,000 from 40,553 in 2013 to more than 52,000 in 2014, increasing the demand for Chinese language teachers.

Marita Richardson, principal of St Joseph's Primary School in Melbourne's outer fringe, said that it was important for students to learn an Asian language for economic and social relations, but a lack of teachers in Australia forced the school to trial the program. "It can be so difficult to find teachers where we are, especially Asian language teachers and it's an issue because we are neighbors with Asia," she added.

The program incorporates a 25-minute, weekly class which is taught by registered teachers from Beijing. The local teacher also sits in on the class, and then assists students for a further hour every week, using material and tips from the Chinese-based teachers.

Shugg said that the tool was not only important for students, but also for teachers that, through also learning the language online, could go on to successfully teach Mandarin in Australia. "More and more schools are realizing there are real issues around sustainability of language resources and this is a way to combat that," he said.

"Poor access to language teachers and resources is felt right across the country. It's a problem that every state is familiar with, and that's why schools have been open to the idea of utilizing the online resource."