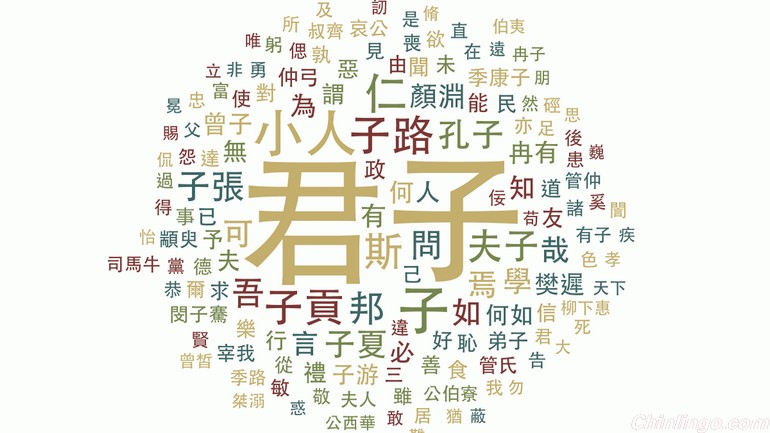 Rather than approaching the edge [of the waters] admiring the fish, it’s better to take a step back, and prepare to cast a net over the waters [and catch the fish]

This proverb was used as a parable from 董仲舒, a politician and a philosopher, who warned the emperor of his time that if he wanted to manage the country well, it was important to do so in a principled and institutional way.

An interpretation of this warning comes to us in two parts: the objective and the means. Important as it is to have a clear objective in mind, it is equally important to have the means to go about achieving that objective, lest it become a mere delusion. It reminds us to sometimes take a step back from fixating too much on our goals, and revise our approaches to reach our most immediate objective.

The heart of a 君子 cares not about his own (selfish) desires, but of all that it encompasses from his breadth of heart.

This proverb talks about two very important ideals that Chinese people deem significant: “君子” and “气量”. If you look up the dictionary, you will see that the translation is “gentleman” and “tolerance” respectively, though I argue these are only loose approximations of their Chinese counterparts.

君子 is someone who is more than a gentleman. By the norm, we often consider a person to be a gentleman if he (and I don’t discriminate between genders here, “he” is just a convenient placeholder for a person, and an appropriate one, I think, in the male-dominant ancient China) demeans himself gracefully and treats women courteously.

君子, however, represents neither of these things. While these traits might be included in a person who is considered a “君子”, having these traits don’t necessarily make one a “君子”.

In essence, someone who can be called a 君子 (and it’s as big a deal in the past as I’m making it here!) is someone who is highly virtuous and of noble character, and he represents the ideal personality a man should have in Confucius’ teachings.

The term “气量” has the translation “tolerance”. While tolerance represents the mechanism for someone to have 气量, it’s a bit broad, because it can be an umbrella for different types of tolerances, such as a tolerance to pain, which isn’t 气量。

A Chinese synonym is the term “胸襟”, and I mention it because it can be better translated as “breadth of heart”.

In my opinion, a person’s “胸襟” is the ability for a person to is one’s ability to tolerate others’ small misdeeds, to not exact revenge over someone’s wrongdoings to you, to be generous and accepting of others’ flaws and shortcomings, and to forgive others even when they are undeserving of such forgiveness.

With this in mind, let’s go back to the original proverb and see what it means:

The heart of a 君子 cares not about his own (selfish) desires, but of all that it encompasses from his breadth of heart.

It reminds us that we should aim to serve the greater good, and not act for our own selfish desires, as befitting of a 君子.

The demeanour of a 君子 who is both noble of character and proficient in [his] trade relies on one’s centre of calm to train one’s mind and body, and one’s ability to be frugal to train one’s character. It is not possible to clearly establish one’s goals without letting go of such notions of fame and glory; nor is it possible to achieve grand aspirations without firstly possessing a calm mind and body.

This reminds us of the importance to need to focus, albeit in an indirect way.

In order for us to achieve our goals, 诸葛亮, the author of this book from which this proverb is quoted, writes of the importance of being calm in order to make well thought out decisions to steadily inch towards our long term goals.

An army can conquer a general, but no man can rob one of his ambition.

Confucius writes this as a firm reminder of the importance of having ambition in one’s life. The word “志” means “志气” in the above sentence, and the Chinese term is roughly equivalent to a combination of “ambition”, “spirit” and “morale” in English.

I think that another way to interpret this is the importance of having free spirit. It’s similar to saying that “You can rob me of all my earthly possessions, but you will never own my last sanctuary – my spirit.”

This reminds me of a lengthy discussion I had with one of my friends – she thinks that friends should be in frequent contact, and one should have many friends; I think that it’s not as important to talk a lot to friends, nor is it as important to have a great number of friends.

Confucius says, “When I was fifteen, I was focused on my studies; when I was thirty, my understanding of life [as it stands] was set firmly; when I was forty, I no longer hesitated about making my life decisions; when I was fifty, I understood the origins of all; when I was sixty, I could hear all – the positive and the negative – and not be upset; when I was seventy, I had the freedom to do whatever my heart desires, within the rules of this world [that I have observed throughout all of my life].”

In a short statement, Confucius summarised his entire life and the enlightened state he reached at each stage in his life. Nowadays, it serves as a guiding principle for us to know what we should be doing at different stages in life, and what to expect henceforth.

This quote reminds me of one of Jesus’ parables when he taught his disciples to “love thy neighbour as thyself”. Even if we are not related, even by the mere fact that we are neighbours, friends, or just people who happen to pass by each other, is it not equally as important to respect the elderly’s and look after children equally as we do our own?

老子 observes the co-existence of these two opposing beings – that calamity and prosperity cannot exist without another, and that they share almost an interdependent relationship with each other.

It tells us that because of this relationship, good and bad things can be exchanged, and under the right conditions, even prosperity can turn into calamity, and calamity into prosperity.

I personally think that what 老子 was referring to is the fact that one should not take things too seriously – the good and the bad.

Don’t overestimate the value of the good “fortune” you’re experiencing in life, because it’s just as easy to lose the fortune you’ve gained.

In a similar way, don’t overestimate the effects of the bad “luck” you’re experiencing, because it’s just as easy to go away as it came.

To learn [from a variety of places], To ask [until you satisfy your desire to learn], To reflect [meticulously], To distinguish [clearly between truth and lies], To manifest [that which you have learnt].

These five stages represent the various places in learning, not unlike that of Bloom’s taxonomy, who advocated an hierarchy of learning in this order: Knowledge, Comprehension, Application, Analysis, Evaluation, Synthesis.

That [the person I’m thinking of] be healthy and live a life of longevity; that no distance shall separate our thoughts of each other.

This is actually a portion of the entire poetic verse, which reads “人有悲欢离合，月有阴晴圆缺，此事古难全。 但愿人长久，千里共婵娟。” the former phrase which means, “People will experience sadness and joy; as the moon will appear round and sometimes incomplete (referring to crescents of the moon) – things like these have been prone to imperfection since the days of the old.”