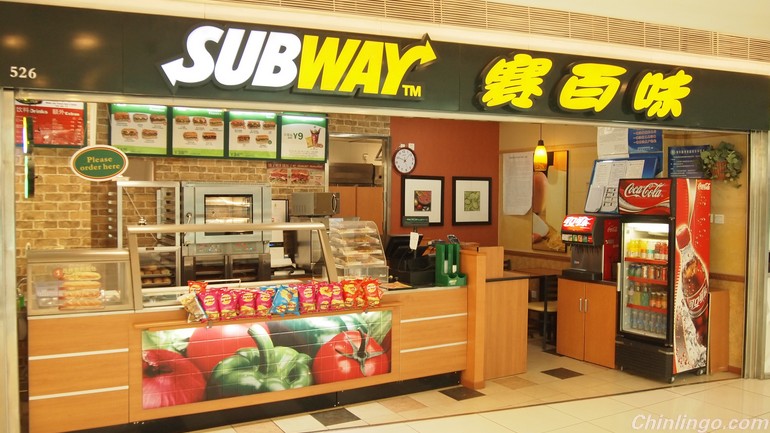 Chinese is a fixed language – there are only a certain number of sounds and characters, so when new or foreign words get introduced, they generally can’t just copy and paste the words and make them “Chinese” – they have to make Chinese versions of them, taking both pronunciation and meaning into account.

This leads to some really clever and cool Chinese names for non-Chinese words, names and concepts, and I’ve collected some of my favorites here for your educational enjoyment:

The ubiquitous American sandwich chain is a common sight in Chinese cities, because hey, everyone likes sandwiches (also the cookies are 3 for 8rmb / US$1.28!). Its name is a nice touch – it’s a close phonetic approximation of its English counterpart and “competition of 100 flavors” is one possible interpretation of the name.

赛 can also mean “to surpass” or “be better than,” which is actually cooler when you think about it, and is probably the intended meaning here.

I do love the idea of green peppers and pickles facing off in a battle royale for my taste buds. What a fun name for a place with lots of flavor customization options to choose from!

I love this one! San Fran was the arrival point for the majority of Chinese immigrants to the US in the 19th and early 20th centuries, most of whom headed to the mountains to take advantage of the Gold Rush.

The city became strongly associated with gold mining in the Chinese imagination, which led to the name 旧金山.

It’s actually particularly fitting these days, given that the city isn’t known for gold mining anymore: 旧 is frequently applied to former or past versions of things, e.g. “旧时代 (jìu shí dài)”, or “the olden days” (时代 meaning era or period of time).

While 旧金山 is commonly used here in the Mainland, I’m told that the more phonetic “三藩市” (sān fān shì) is the primary term used in Taiwan for whatever reason.

This is a pretty famous example of a successful brand translation case study, and it gets bonus points from me because it’s easy to write.

Fun note: Diet Coke is called 建怡可乐 (jiàn yí kě lè), which I used to (and still do, frankly) mispronounce as 建议 (jiàn yì), or “suggestion,” so I was always asking for “Suggestion Cola,” which sounds like something from a Chuck Palahniuk novel.

Whoever came up with this must not be much of a Mavs fan, as 小牛 is the term usually used to describe baby cows, not exactly something that inspires fear (unless you’re a reckless adolescent cow! Sorry…). I can understand where they’re coming from, since an unbranded baby cow is one definition of “maverick,” but it’s rarely used that way in English and I get the sense it wasn’t the sort of vibe the team was going for when they chose the name.

This is particularly cool if you’re a Chicago Bulls fan, since it makes it seem like the Mavs are the inferior little brother of the Bulls, who are known as 公牛队 (gōng niú duì).

Speaking of the Mavs, Dirk Nowitzki is known as 德克 (dé kè) among Chinese fans, which is cool because he’s German and 德 is the common shorthand term for Germany. I swear I could talk about this stuff all day!

Pizza Hut in China is a whole hilarious entity unto itself: much swankier than its American version, it’s more of a sit-down restaurant with a significantly bigger menu. People often go there for important occasions – I had Christmas dinner last year at a Pizza Hut on the 34rd floor of a building in Xiamen, for instance.

Anyway, 必胜客 is a weird choice because there’s already a commonly-used term for pizza in Chinese, 披萨 (pīsà), but you can’t deny that amazing meaning. I mean, how many restaurants guarantee a victorious experience every time? It’s such a blatant example of marketing that I can’t help but find it hilarious.

This one is really funny because the Indonesian island Bali is an increasingly popular holiday destination for Chinese travellers, and though it’s written differently, it is literally pronounced exactly the same as the City of Lights itself: 巴厘 (bā lí).

This confusion is a legitimate problem, so it’s becoming common to call Bali 巴厘岛 (bā lí dǎo), or “Bali island.” But c’mon, that’s no fun – I’d be pretty psyched if I’d meant to book a trip to Paris in the winter and ended up in tropical Bali instead, but maybe that’s just me.

It’s a clever name for a search engine, to be sure, but I couldn’t understand why 必应 was used when there are Chinese characters with the exact same pronunciation as “bing.”

However, the character most commonly associated with “bing” is 病 (bìng), meaning illness. That character (病)is featured in most terms related to sickness and being sick.

There are obviously plenty of other characters with the “bing” pronunciation in Chinese, and it’s not like “bing” in English has a tone attached to it that would necessitate it being pronounced with a 4th tone, but Microsoft nonetheless felt the connection was so strong that they should pursue another name.

Miami Heat star LeBron James is often called “King James” by English-speaking fans and media, and his formal Chinese name is 詹姆斯 (zhān mǔ sī), the common translation of the name James. It’s really interesting how the term 詹姆斯 has become so strongly associated with him in Chinese, though – look at the image search results, for instance – even though it is such a common English name is used frequently in Chinese.

We don’t really do this in English, at least not to the same extent. Regardless, I love the nickname 詹皇, because it’s a uniquely Chinese twist on its English counterpart. China never really had kings, but they had plenty of Emperors, so calling him “Emperor James” makes perfect sense.

Though the Chinese term 素食 (sùshí) would seem like a natural translation choice for sushi (at least for us English speakers), it in fact means “to eat a vegetarian diet” – in other words, to not eat sushi!

Which brings us to 寿司 as a much better alternative, at least in meaning.

Eating sushi is often associated with living a long and healthy life, for instance, and it comes, of course, from Japan, a country known for its residents’ longevity. That makes “department of long life” so much more appropriate!