A talk about Chinese ways of saying “No” 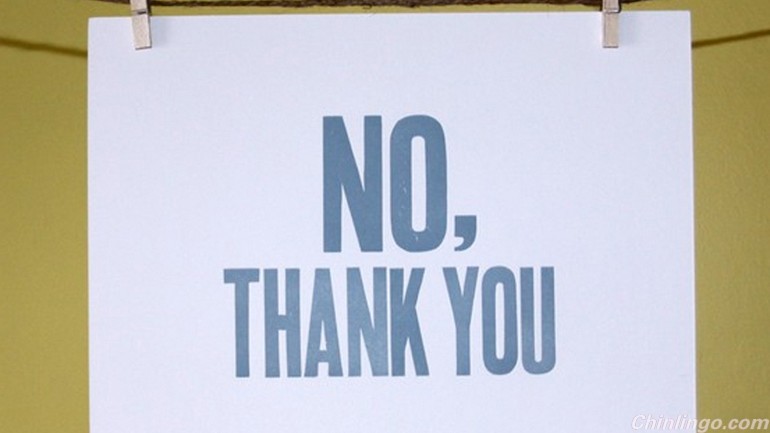 So, we all know that there's no particular word in Chinese that can be translated as just "no."  (Watch this lesson if you don't know what I'm talking about.)

But did you know that there are all sorts of phrases that COULD mean "no" even if they mean something else when taken literally? Those phrases can be misleading if you come from a culture that values direct communication.

If you ask 10 Chinese people what, generally speaking, one of the biggest differences is between them and Americans, I bet at least half of them would mention something about Americans being much more "direct."

On the other side of the coin, the "indirect" nature of Chinese interactions can drive an American crazy. They feel like they always have to guess what a Chinese person really means, and have to force people to give a clear "yes" or "no" answer to any questions.

I always felt like I was one American who could help to bridge that gap.  I felt like I didn't fit the "direct American" profile.  Saying a direct "no" to someone made me feel uneasy.

So I, of all people, ought to be able to really understand where a Chinese person is coming from when they talk in a roundabout way.

Or so I thought.

After living in China for my first few years, I finally came to terms with the fact that compared to the average Chinese person, even I can in fact be downright blunt at times.

I eventually figured out my main problem was that I simply expected people to mean exactly what they said. I took words at face value, and finally realized that it was causing me problems.

If I was ever going to be able to understand a "no" when it heard one, I needed to learn to decode a few key phrases.

If you're asking for help / a favor, you might hear…

Scenario: You walk into a store, and ask for something in particular.  The shop clerk tells you, "méi yǒu."

This response was really common back in the "iron rice bowl" days when nobody's job depended on sales targets or customer service.

These days it's less common, but you still hear "méi yǒu" from time to time in government service offices such as at the post office or the visa bureau, or if you happen to catch somebody in a bad mood.

"Let me think about it"

Scenario: You ask a coworker if she will go to the boss with you to ask if everybody in your department can leave early on Friday.  You tell her that the boss is more likely to agree if she asks too.

She tells you, "Xiǎng yī xiǎng ba."  You're happy with that, and give her a few minutes to think it over.

She wants to make sure your relationship with her remains in good terms, so rather than just telling you "no" and risk you being upset with her, she tells you that she will "think about it."

Scenario: You're going to a live music bar with some friends, and asked a Chinese friend to join you.

He seemed really happy to receive your invitation, but when it's time to meet, he says his uncle came to town, so he can't join you.  "Maybe another day."

You ask him when his uncle is leaving so you can reschedule and he gives you a vague response.

What it actually means:  "I don't want to, but I needed to find a way to let you down easily."

In this case, there's probably no uncle, but a white lie is a good way to help you save face and to keep your friendship. The friend probably just doesn't think he'd enjoy going to a loud bar with a bunch of foreigners.

Scenario: You're heading out after work for dinner with some friends.  You ask a coworker to join you, but she says she's busy, so maybe next time.  But the next time you ask her, she says the same thing.

What it actually means:  "No thanks."  This one is pretty straightforward.

When someone says, "next time," save yourself some embarrassment and don't take it literally.  Chances are, the answer next time will be the same.

"It's unclear to me"

Scenario:  You ask for directions from someone on the street.  Before you even get a chance to finish asking your question, the guy shakes his head and says, "I'm not sure."

What it actually means:  "I don't want to tell you or I truly have no idea.  Please don't ask me again."

If someone is quick to say, "I'm not sure," it's best to just leave it at that. Don't try to offer more information that might help shed some light on what you're asking.

Scenario: You ask the shop assistant who said "méi yǒu" when the store might have more of the item you're looking for in stock.

She replies "guò liǎng tiān ba," so you make a note to try again in two days' time.

What it actually means: "Maybe at time point in the future.  I don't know when."

I made the mistake of taking this phrase literally.  I showed back up at the shop two days later, and the woman told me again, "gùo liǎng tiān."  Then it became clear to me that "two days" doesn't really mean "two days" in this phrase.

Once I learned to identify a thinly veiled "no" in Chinese, I was able to save myself a lot of misunderstanding. But the biggest advantage to learning these phrases was being able to put them to use myself.

0 responses on "A talk about Chinese ways of saying "No""