How to use Chinese filler words 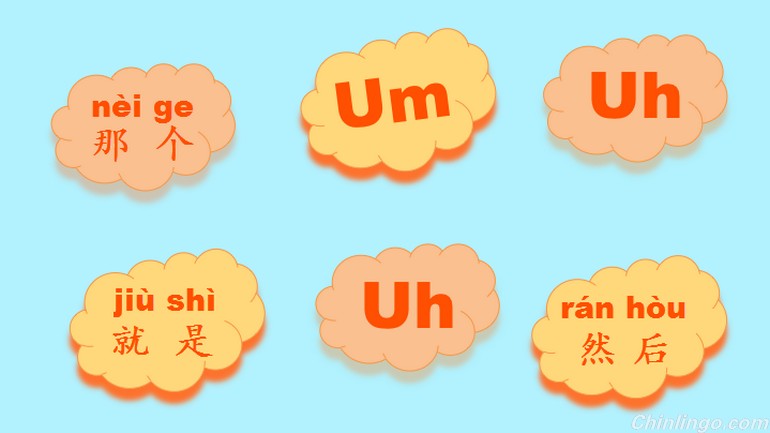 Although you can practically make an entire sentence out of them, they don't make for very impressive oratory.

Filler words are hard to avoid, though, in everyday, casual conversation. They do serve a purpose, after all.  True to their name, they fill in what would otherwise be gaps of silence as you search for the right words.

We all use them as a way to buy us a bit of time to think as we speak.

If you rely on filler words in your native language, then you need them even more when you speak a foreign language.  But of course, filler words aren't universal. You can't just insert a "well" or "um" into Chinese, for example.

Not that people haven't tried. One summer I was teaching Chinese at Middlebury College, which has a strict "Chinese only" language pledge for summer school students, so all conversations are supposed to be entirely in Chinese.

One time I overheard this conversation among a couple of second year students:

At first I cringed and wondered how students were allowed to have such lazy habits in a rigorous program like Middlebury's.

But as I thought about it, I realized that no one had ever taught those students any alternatives to their "likes" and "ums."  They hadn't learned yet to let go of the filler words that they probably use all the time in English and exchange them for a new set of filler words in Chinese.

Filler words are definitely worth learning for several reasons.  The first reason is because, well, you need them.  You need them even more in Chinese than you do in your native language, because you need extra time to think before you speak.

Apart from what you want to say, you have to think of how to say it correctly, including pronunciation and tones and word order.  So of course you're going to need some extra time to work it all out as you speak.

Second, you need to learn Chinese filler words so that you can avoid sounding silly if you're ever tempted to slip an "um" or "well" into a Chinese sentence.  By being able to use a normal Chinese filler word instead, your Chinese will instantly sound more natural and fluent.

Lastly, you should learn them because they are probably words that you already know in Chinese anyway, so they're really easy.  It's just a matter of learning to use those words in a different way.

One of the most common filler words that Chinese people use all the time is "nèi ge" (那个), which as you know just means "that one."

This is one of the most liberally used Chinese filler words.  You can place it just about anywhere in a sentence, similar to an "um" or "uh" in English.

For instance, let's say someone asked you what you had for lunch yesterday.  You probably have to think about it, saying, "Um…I had a, uh, hamburger."  In Chinese, that would be, "nèi ge…wǒ chī le yí gè… nèi ge…hàn bǎo bāo." (那个，我吃了一个那个… 汉堡包。)

Another filler word that Chinese people use all the time is "jiù shì" (就是).  This one can also be used almost anywhere in a sentence.

Sometimes you might hear it used together with "nèi ge."  For example, another way to answer that lunch question would be, "wǒ…jiù shì…chī le yí gè…nèi ge…hàn bǎo bāo."  (我就是吃了一个那个汉堡包。)

I also hear people using the word "rán hòu" (然后) all the time. You probably know that it means "and then," and is generally used to describe a sequence of events, as in "first this happened, and then that happened."

But people often use it as a way to buy themselves some time to think about what to say next, similar to how we might say, "and, um…" in English.

The filler words I mentioned above are easy enough to include in everyday conversations.

But if you're looking for something even easier and closer to home, here's a Chinese filler word you'll probably like: "ēn (嗯)".

It sounds vaguely similar to the English filler word "uh", but has a hint of an "n" in there.

Like I said before, these filler words are worth learning because they provide you with a strategy for giving yourself a moment to think of what to say next without, you know, compromising on, like, fluency.

0 responses on "How to use Chinese filler words"