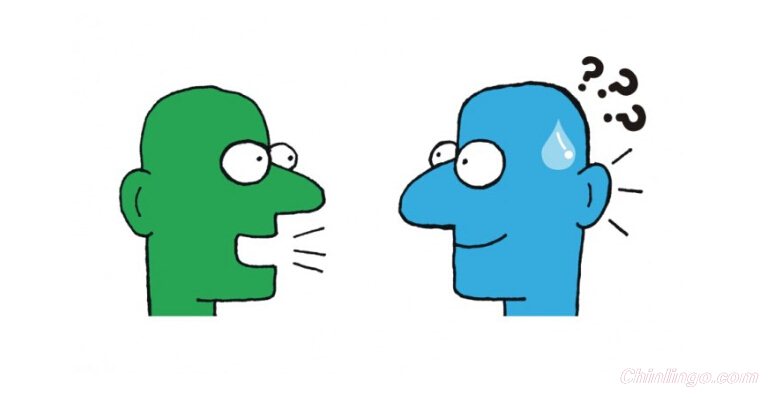 One of the frustrating things about learning Chinese is the high frequency of incidents where my Chinese just "doesn't work."I may be saying something I've said a thousand times, and the next time I say it, I just get blank stares and loud blinking in response. Why?

There are several reasons why your Chinese might not be working:

1. You're saying it wrong. This is likely, especially if the tones aren't exactly right.  I've said things before, and realized right when I finished that I said one tone wrong.  While I'm preparing to say it right, I notice the listener has no clue what I'm talking about.  Say one tone wrong, and sometimes you might have had better luck speaking Portuguese.  I said it again, with the right tone, and she immediately understood what I meant.  The tones are important. I wish it weren't like that, but it is.

2. Your voice quality is wrong for Chinese.  Ok, this is a weird one, but I have heard from several Chinese people that foreigners' voices (this especially applies to men) are too deep.  They also seem to be talking about the idea of "resonance." The Chinese people, in general, seem to think this is "bù hǎotīng 不好听" (not nice sounding), and possibly more difficult to understand. If you listen to Chinese people (even men) their voices are a lot higher pitched and thinner, in general, compared to English speakers. (Traditional Chinese singing is also much higher and "screechier" to our ears.) So, one way to combat this is to talk in a higher pitched voice, and try to reduce the resonance of your voice (make it thinner). I've found this makes my Chinese sound more…um…well, Chinese and may even make it easier to for them to understand.

3. They don't want to understand you. This has happened a lot too.

Maybe the Chinese listener has decided before I opened my mouth that I don't speak Chinese and has decided that whatever I'm about to say is English or Russian.

Or, perhaps we've had a partial conversation in Chinese already and the listener has decided that I'm about to ask for a discount and is ready to say "no" when I actually ask if there are any other kinds. The listener answers the prepared "no" because he's already decided what I'm going to say and just shut off his listening.

Or, as happened yesterday, the listener may not like me. I went to investigate a tennis club and I could tell immediately from the expressions and stopping and staring that foreigners (or maybe just non-friends of the current members) were not welcome. When I asked (as I have a thousand times) what time they open in the morning, the answer was "méiyǒu 没有." That doesn't make sense. Did he not understand me? So they don't open in the morning?  How are people playing right now? I asked what time in the afternoon they opened. "méiyǒu 没有." Ah, ok. I get it. I'm leaving.

4. They don't speak Mandarin. Everyone always says Mandarin is spoken by 1.3 billion people in China. Wrong. Only about half of the Chinese people in China can speak Mandarin (see this article). It is also worth noting, that even if they can speak Mandarin, they don't want to. If two Chinese people are together and they both speak the same regional dialect,or a mutually intelligible one, they will always, and I do mean always, prefer to speak that dialect to Mandarin.

So, as you can see, it may not be your fault that your Chinese is "broken." That can be strangely comforting, but also frustrating.

0 responses on "They don't understand my Chinese, what's wrong?"