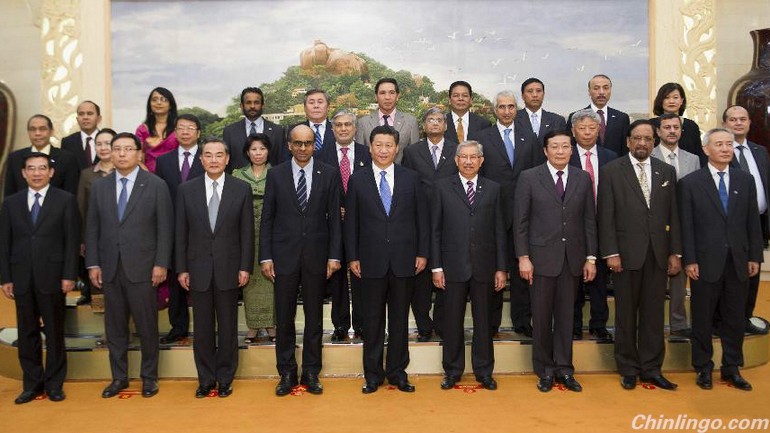 PHNOM PENH, March 25 (Xinhua) — The fear which the United States has been betraying for the China-proposed Asian Infrastructure Investment Bank (AIIB) is premature and Sinophobia, said an India-born expert at a Cambodia university.

"The U.S. fear or rather phobia that AIIB lacks international standards of governance and transparency is premature and Sino- phobic," Joseph Matthews, director of International Cooperation Department at the Phnom Penh-based Asia Europe University, wrote in an article released to Xinhua.

A Memorandum of Understanding on Establishing AIIB was signed on Oct. 24, 2014, in Beijing with an initial capital of 100 billion U.S. dollars.

"This is a unique bank in terms of its name and mission. Its main purpose is to provide finance to infrastructure projects in the Asia region," Matthews wrote.

The AIIB, which aims to become an international financial institution providing support to infrastructure projects in Asia, has prospective founding members including Britain, France, Germany, Italy, Luxembourg and Switzerland.

When it was firstly announced, most of the Western countries, especially the United States, regarded it as a rival for the International Monetary Fund (IMF), the World Bank and the Asian Development Bank, which are dominated by the developed countries including the U.S., Matthews noted.

"But, most of the economists, financial experts and bankers around the world think otherwise, they believe, the establishment of AIIB is the result of decades long frustrations and disappointments that were constantly growing in developing countries against these three financial institutions, and they regard slow pace of reforms and output of these banks have created a gap where AIIB is being considered as a breath of fresh air for the financial-choked countries," he wrote.

The expert believed that for any developing country, qualifying for any kind of assistance, loan, credit line or financial aids, from these three financial institutions come with strident conditions and measures that sometimes affect sovereignty, self- respect and integrity of the whole nation.

"There were so many countries in the past, which opted for the bankruptcy rather than surrender to the conditions of these three financial institutions. We all know, what happened in Argentina, Cyprus and now in Greece," he wrote.

Cambodia, as a founding member, is also looking forward to an alternative source of funding for its poor, dilapidated and non- existent infrastructure.

"After having being seen the global scenario and enthusiasm of developing countries to joining the AIIB, forced the many western countries to change their hearts and minds," Matthews wrote.

"I would like to make a prediction about the AIIB that, in the future, it will grow tremendously in the terms of members, investments and lending that those member countries will be forced to change its present name from AIIB to Global Infrastructure Investment Bank (GIIB)."