Obedient to Mother with Flimsy Clothes 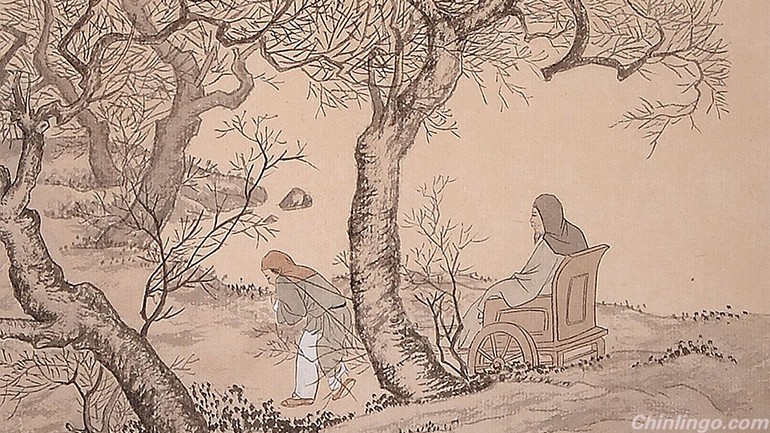 Min Sun, with the alias of Ziqian, was a man in the State of Lu during the
Spring and Autumn Period. He was a disciple of Confucius. Among all disciples of
Confucius, he stood comparison with Yan Yuan in terms of moral conduct.

Confucius ever praised him as follows:"How filial Min Ziqian is!" (Xian Jin,
the tenth chapter of Analects of Confucius)
孔子曾赞扬他说：“孝哉，闵子骞！”（《论语·先进》）。

One day, he followed his father to go out. When towing the chariot, Min Sun
shivered because he felt very cold and the rope dropped onto the ground. Then
his father scolded and lashed him.
一天，父亲出门，闵损牵车时因寒冷打颤，将绳子掉落地上，遭到父亲的斥责和鞭打

The reed catkins flew out from the broken seam of the flimsy clothes, and
then father knew that Min Sun had been mistreated.

After the father returned home, he wanted to divorce his wife.

Min Sun fell on his knees and begged his father to forgive stepmother.

He said: "If mother stays at home, only I myself have to endure cold. But if
you divorce from mother, all three children have to suffer from cold."

His father was deeply moved and took Min Sun's advice. The stepmother heard
of this, felt remorseful and owned up to her mistakes. Subsequently, she treated
Min Sun as her own son.
父亲十分感动，就依了他。继母听说，悔恨知错，从此对待他如亲子。

This is the story about "闵损芦衣".

0 responses on "Obedient to Mother with Flimsy Clothes"