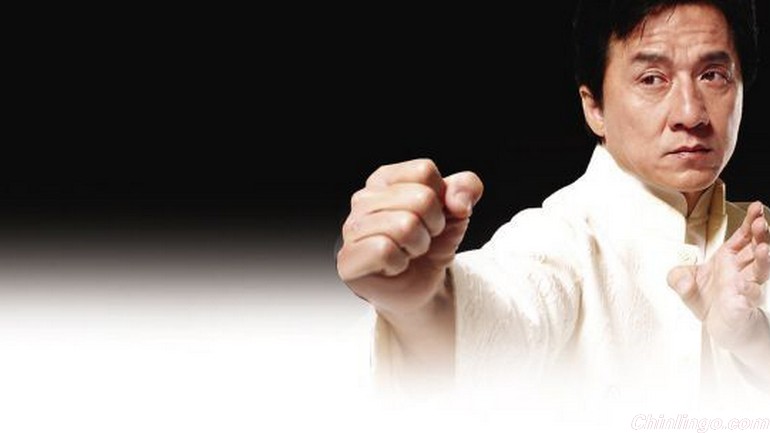 Jackie chan was born in Hong Kong on April 7th, 1954. His parents, Charles
and Lee-lee Chan named him Chan Kong-sang which means "born in Hong Kong."
Jackie weighed 12 pounds when he was born and his mother required surgery to
deliver him. Jackie's parents were so poor that they had to borrow money from
friends to pay the doctor.

Although Jackie's parents were poor, they had steady jobs at the French
embassy in Hong Kong. Chαrles was a cook and Lee-lee was a housekeeper. Together
, the Chan family lived on Victoria Peak in Hong Kong. When Jackie was young ,
his father would wake him early in the morning and together they would practice
kung fu. Charles Chan believed that learning kung fu would help build Jackie's
character, and teach him patience, strength, and courage.

When Jackie was seven year old Charles took a job as the head cook at the
American embassy in Australia. He felt that it would be best for Jackie to stay
behind in Hong Kong to learn a skill and so enrolled him in the China Drama
Academy where Jackie would live for the next 10 years of his life.

During Jackie's time at the school, he learned martial art，acrobatics,
singing，and acting. The school was meant to prepare boys for a life in the
Peking Opera. Chinese opera was very different from any other kind of opera. It
included singing, tumbling, and acrobatics as well as martial arts skills and
acting. Students at the school were severely disciplined and were beaten if they
disobeyed or made mistakes. It was a very harsh and difficult life but Jackie
had nowhere else to go.

While at the China Drama Academy, Jackie made his acting debut at age eight
in the Cantonese movie Seven Little Valiant Fighters: Big and Little Wong Tin
Bar. He later teamed with other opera students in a performance group called
"The Seven Little Fortunes." Fellow actors Sammo Hung and Yuan Biao were also
members. Years later the three would work together and become known as The Three
Brothers. As Jackie got older he worked as a stuntman and an extra in the Hong
Kong film industry.

When Jackie was 17, he graduated from the China Drama Academy. Unfortunately
the Chinese opera was no longer popular, so Jackie and his c1assmates had to
find other work. This was difficult because when they were at school they were
never taught how to read or write. The only work available to them was unskilled
labor or stunt work. Each year many movies were made in Hong Kong and there was
always a need for young, strong stuntmen. Jackie was extraordinarily athletic
and inventive, and soon gained a reputation for being fear1ess; Jackie Chan
would try anything. Soon he was in demand.

Over the next few years, Jackie worked as a stuntman, but when the Hong Kong
movie industry began to decline, he was forced to go to Australia to live with
his parents. He worked in a restaurant and on a construction site. It was there
that he got the name "Jackie." A worker named Jack had trouble pronouncing "
Kong-sang" and started calling Jackie "little Jack." That soon became "Jackie"
and the name stuck.

Jackie was very unhappy in Australia. The construction work was difficult and
boring. His salvation came in the form of a telegram from a man named Willie
Chan. Willie Chan worked in the Hong Kong movie industry and was looking for
someone to star in a new movie being made by Lo Wei, a famous Hong Kong producer
and director. Willie had met Jackie once at work as a stuntman and had been
impressed. Jackie called Willie and they talked. Jackie didn't know it was
Willie who would end up becoming his best friend and manager. Soon Jackie was on
his way back to Hong Kong to star in New Fist of Fury. It was 1976 and then
Jackie Chan was 21 years old.

Once Jackie got back to Hong Kong , Willie Chan took control over Jackie's
career. To this day Jackie is quick to point out that he owes his success to
Willie. However , the movies that Jackie made for Lo Wei were not very
successful. The problem was that Jackie's talents were not being used properly.
It was only when Jackie was able to contribute his own ideas that he became a
star. He brought humor to martial arts movies; his first success was snake in
Eagle's Shadow. This was followed by Drunken Master (another blockbuster) and
Jackie's first ever directing job, Fearless Hyena. All were big hits.

Jackie was becoming a huge success in Asia. Unfortunately, it would be many
years before the same could be said of his popularity in America After a series
of lukewarm receptions in the U.S., mostly due to miscasting, Jackie left USA
and focused his attention on making movies in Hong Kong. It would be 10 years
before he returned to make Rumble in the Bronx, the movie that introduced Jackie
to American audiences and secured him a place in their hearts (and their box
office). Rumble was followed by the Rush Hour and Shanghai Noon series which put
Jackie on the Hollywood A List.

Despite his Hollywood successes, Jackie became frustrated by the lack of
varied roles for Asian actors and his own in ability to control certain aspects
of the filming in America. He continued to try, however, making The Tuxedo, The
Medallion, and Around the World in 80 Days，none of which was the blockbuster
that Rush Hour or Shanghai Noon had been.

Jackie's lifelong devotion to fitness has served him well as he continues to
do stunt work and action sequences in his films. In recent years，Jackie's focus
has shifted and he is trying new genres of film fantasy，drama，romance-and is
spending more and more time on his charity work. He takes his work as Ambassador
for UNICEF/UNAIDS very seriously and spends all his spare time working
tirelessly for children, the elderly，and those in need. He continues to make
films in Hong Kong, including the blockbuster drama New Police Story in
2004.

Jackie has been married to Lin Feng-Jiao since 1982 and has a son ,
actor-singer Jaycee Chan.

0 responses on "Jackie Chan - The King of Kung Fu"