Legend of the White Snake (Baishezhuan) 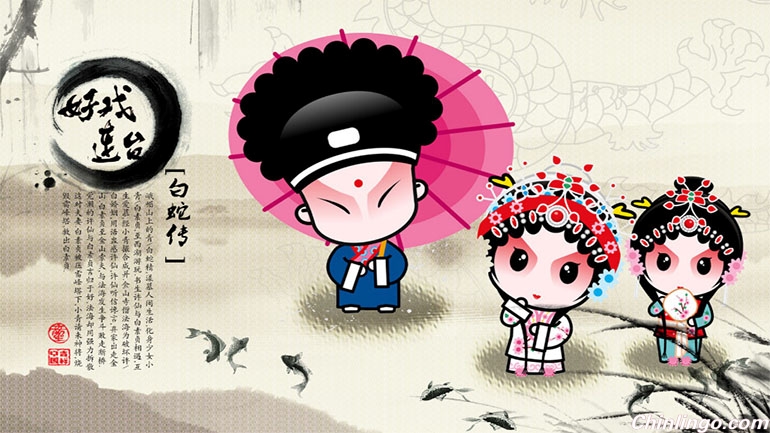 Legend of the White Snake is one of the most famous tales spreading out among folks in ancient China. The tale goes that a white snake came to the human world as she was longing for human life (another version holds that she wanted to repay an obligation), and married a scholar named Xu Xian. However, such marriage was opposed by Fahai, a Buddhist monk in Jinshan Temple, who maintained that coexistence of human and evil spirit was unallowable. He then suppressed the white snake (Madam White Snake) under Leifeng Pagoda at the bank of the West Lake. Many years later, after gained a Zhuangyuan title (the first place in the imperial examination), Madam White Snake's son offered sacrifice to his mother in front of the Leifeng Pagoda. God was moved by his action and made the pagoda collapse, which enabled the family to reunite. Provided the first half of the tale is a love story, the second half can be perceived as a narration regarding struggle and striving.

The legend happened in the West Lake of Hangzhou. It is said that Madam White Snake met Xu Xian on the now "Broken Bridge" at the White Dike of the West Lake. Up to now, visitors may still recall the story as they view and admire this scenic spot. More importantly, the huge quantity of ancient traditional customs preserved in this legend has made it become one of the oral heritages containing the most abundant folk customs in China.

Legend of the White Snake derives from the Tang and Five Dynasties and is handed down through the Ming and Qing Dynasties until now. Through the adaptation and performance of oral folk literature and various conventional literature, this tale became a classical theme of a variety of literal forms including story, ballad, precious scroll, fiction, historical novel, script for story-telling, drama, Tanci, as well as movie, TV play, cartoon, and comic strips. It has therefore experienced an ever expanding influence and becomes widely known in China, and furthermore, spreads in many countries such as Japan, North Korea, Vietnam, and India.

0 responses on "Legend of the White Snake (Baishezhuan)"