The Palace of Eternal Life 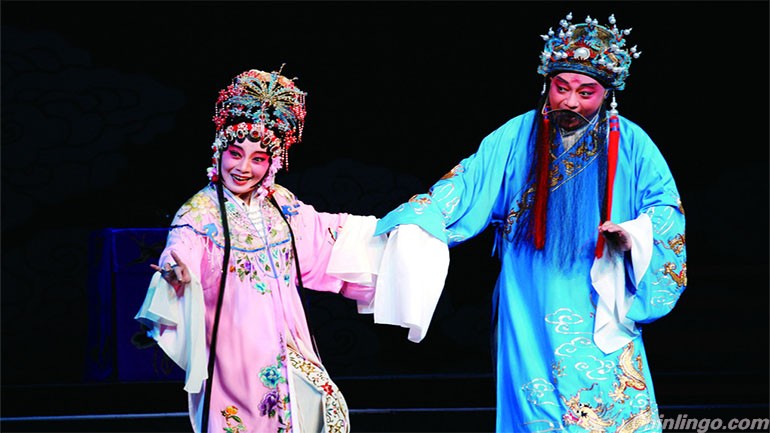 Palace of Eternal Life is a chuanqi in fifty acts. The play recounts the love story of Emperor Tang Xuanzong and his favorite consort, Lady Yang Guifei. Though based on a large body of earlier literature and legend, it is unique in its overall form and lyric exposition.

When Lady Yang becomes the Emperor's favorite consort, he gives her as love tokens a gold hairpin and a casket adorned with gold-leaf flowers. Her older brother Yang Guozhong becomes Chancellor of the Right. Banished once for a fit of jealousy, she regains favor by sending the Emperor her shorn locks as a token of her love. A frontier genenal, An Lushan, is sent to the capital for an offense, but Yang Guozhong obtains a pardon for him, and he wins a promotion and a princely title for himself. A military man, Guo Ziyi, who has come to the capital to receive an appointment, witnesses from a wine house window the extravagant pomp and splendor enjoyed by the Yang family and An Lushan. A prophetic verse on the wine-house wall foretells doom. Guo is appointed a powerful military commissioner and resolves one day to repay his debt to the imperial court in deeds.

Chang E, the Moon Fairy, wishing to pass on the beautiful music of the Rainbow-skirt Feather-jacket Dance to mortals, summons Lady Yang's soul to her in a dream and teaches it to her. At her birthday banquet in the Palace of Eternal Life, Lady Yang later performs the beautiful dance for the emperor.

After challenging the power of Yang Guozhong, An Lushan is exiled from the capital by the Emperor. He stirs up a rebellion, and Guo Ziyi trains his troops to counter the imminent rising. Oblivious of this situation, Emperor Xuanzong and Lady Yang bathe together in a warm spring and on the seventh of the seventh month, loves' night, make a sacrifice to the Herd Boy and Spinning Damsel star gods, vowing eternal love for each other. When An's forces menace the capital, Xuanzong departs with his entourage toward the relative safety of Sichuan. On the way, at Mawei mail halt, his mutinous troops, blaming the Yangs for their plight, kill Yang Guozhong and demand Lady Yang's death. Helpless, Xuanzong allows her to hang herself, and she is provisionally buried there. An Lushan usurps the imperial throne, and takes over the capital. Xuanzong, grieving for Lady Yang, on reaching Sichuan places a portrait of her in a temple and worships and weeps before it. Meanwhile, moved by the plight of Lady Yang's forlorn soul, the Spinning Damsel persuades the Jade Emperor of Heaven to permit Lady Yang to become an immortal in the paradise of Penglai. She also gives Lady Yang liquid jade and liquid gold to pour on her corpse, thereby reuniting body and soul.

Imperial power is transferred to Emperor Suzong, Xuanzong's son, who sends Guo Ziyi to quell the rebellion. Guo succeeds and the two Emperors head back to the capital. When he passes through Mawei, Xuanzong can find no trace of Lady Yang's body-only her perfume sachet. Back in the capital, he dreams that Lady Yang has sent for him and afterward commands the Taoist necromancer You Tong to seek out lady Yang's soul. Aided by the Spinning DamseL, the Taoist reaches Penglai, where Lady Yang gives him half the gold hairpin and part of the casket to take to Xuanzong as tokens of renewed love. On the appointed date, You Tong sets up a fairy bridge to the Moon palace and sends Xuanzong alone on it to the moon. There the two lovers are blissfully reunited, match the halves of the hairpin and the casket, and thanks to the Spinning Damsel's efforts are commanded by the Jade Emperor to dwell forever as man and wife in paradise.

The writing of the play has been praised in terms of both the sung and spoken passages. Much of the play's poetry is indebted to one of the most celebrated of Chinese narrative poems, Bai Juyi's The Song of Everlasting Sorrow. The Heroine's supernatual proficiency in song and dance gives occasion for the large number of musical and dance scenes, which are artfully balanced by vigorous political episodes. The theme of purgation is admirably treated as and essential part of the story's development, both in the purgation of the emperor's devotion to luxury and in the gradations by which Yang's ghost rises from its initial misery to celestial beatitude. Long as it is, the play moves smoothly and rapidly. It surprisingly combines frank political realism with metaphysics, Confucian ideals of state with Taoistic ideals of the soul, thus well-earning its place among the world's major dramas.

0 responses on "The Palace of Eternal Life"