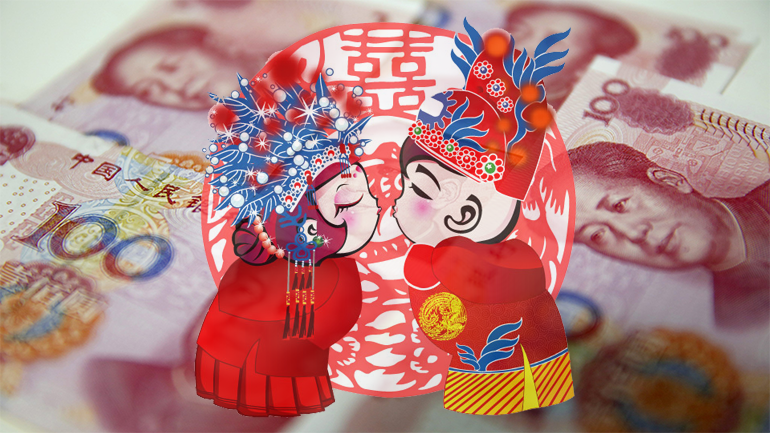 Bride prices, a traditional prerequisite for marriage, are increasingly becoming a miserable burden for families in rural areas across China as it has spiked sharply in recent years. Young men go to cities to work hoping they could improve their family's life, but they often come back to find that what they have earned is insufficient for them to get a wife.

Most parents in China would be happy to find out that their son has found a girl to marry. But Huang, a mother in her 40s from Central China's Henan Province is unable to relax, despite the good news. When her eldest son came back from Guangzhou, South China's Guangdong Province for Spring Festival and was introduced to a girl by a relative, she knew that this was just the first step.

Though Huang's family has already offered the girl around 20,000 yuan ($3,072) in gifts, she is still free to go on more blind dates. Traditionally, the only way for Huang to guarantee she'll marry her son is to offer her family a substantial sum of money as a bride price to seal the engagement. But Huang doesn't have that kind of cash to hand.

A typical bride price in Xincai county, which has been designated by the central government as an impoverished area, has risen sharply in recent years, from 66,000 yuan around five years ago to more than 100,000 yuan now, greatly outpacing growth in local incomes. As on average each family makes just a few thousand yuan every year from farming, it can take a family many years to save up enough money for a bride price.

"The girl looks nice, so I guess the price will not be low," Huang said. "Though it will be hard, we will try every means to get the money, as long as she agrees to marry."

"Every means" will entail borrowing money, yet again. A mother of two sons, Huang and her husband make a living by collecting recyclable materials in Guangzhou. To help her eldest son find a wife, they spent all their savings and borrowed money from relatives to buy an apartment in town two years ago.

Now that the apartment attracted a girl, it's time for them to worry about cash for her bride price and a decent wedding.

Many rural parents across China share Huang's anxiety. Finding a wife for their son could cost them all their savings and drive them into debt.

Li Hong (pseudonym) from Xincai county is desperate to see his son get married. The construction worker spent all of his savings to build a two-storey house last year, a basic requirement for getting a wife in the county. After spending more than 200,000 yuan on the house, half of which was borrowed, he doesn't have a penny left to decorate it.

During Spring Festival he sent his son on blind dates, but is pessimistic about the boy's chances. "Even if a girl agrees, I've no idea where to get the 100,000 yuan bride price,"Li Hong said, adding that he still hasn't repaid his debts.

Xu, a 66-year-old local in Xincai county, said that "getting a daughter-in-law could leave a family broke."

A farmer, Xu used to work in the county seat and knows a lot of people in the county, so sometimes he serves as a matchmaker. According to him, people living in the town don't care much about bride prices, but countryside people still attach great value to them.

A prerequisite for marriage, the bride price, a tradition that can be traced back to the Western Zhou Dynasty (1046-711BC), remains a common custom in most rural areas across China.

"You cannot get a wife without spending more than 500,000 yuan," Xu told the Global Times.

As Xu explains, a family with a son must have a house, built in the countryside or bought in the town. After that, there is the matter of the bride price and the "three gold objects" – gold rings, a gold necklace and gold earrings – and a multitude of other pricey necessities.

"Most need to borrow to get a wife," Xu said, "if an ordinary family has two or more sons, without even asking you know that they must be heavily in debt."

To Li Hongxiang, an expert in marriage law, it is definitely "abnormal." He added that the bride price and cost of marriage are now out of proportion with rural people's incomes."

"Bride prices used to be regarded as a manifestation of mercenary marriage and China's Marriage Law clearly prohibits "using marriage to demand money." But in recent years, these have grown sky-high in many rural parts of the country, including Gansu, Henan, Shandong, Jiangxi and Anhui provinces.

"You can not pay the bride price, but don't expect to take a wife. There are many others who are willing to pay it," said Yang, a Xincai county local.

"If your daughter gets married without a bride price or with a price smaller than others', people might suspect something is wrong with your daughter and you will feel disgraced," Yang said.

Her daughter married two years ago and collected an average bride price, though Yang later returned the money to her son-in-law's family.

Comparisons between women is one cause of spiraling bride prices. When one family demands an above-average price and succeeds, word spreads and other families see it as a new standard to follow. Thus the average price is raised.

But these standards are flexible depending on the suitor.

"An ugly man from a poor family might be asked for 150,000 yuan. But a man who is good-looking will only need to give 66,000 yuan. The girl's family will take all factors into consideration," Xu said.

As rural young people head to the cities to work, women have found it easier to find husbands and stay in urban areas compared with men looking for brides. As a result the already-skewed gender balance in rural areas is becoming increasingly pronounced and girls are scarce. According to a report by Pingliang Weekly, in a village in Gansu the proportion of men to women has reached 4:1.

"Men [who go to cities to work] are in an awkward position. They cannot afford to buy an apartment in the city and stay there, and back at home, it is still too expensive for them to get a wife," Xu said. He added that it is not surprising that men who are really poor often find brides who are divorced, have a child or suffer from mental illness or disability.

But Li Hongxiang argues that it is changing mindsets, rather than shifting demographics, that are driving up bride prices.

"An important reason probably is, in the social context of rapid economic development, people have changed their mindset and expect to get rich quick," Li analyzes.

"Stressing too much on money sometimes harms the stability of a marriage," Li said, "But meanwhile, for a man to get married, first of all he should be capable for it, physically, psychologically and financially."