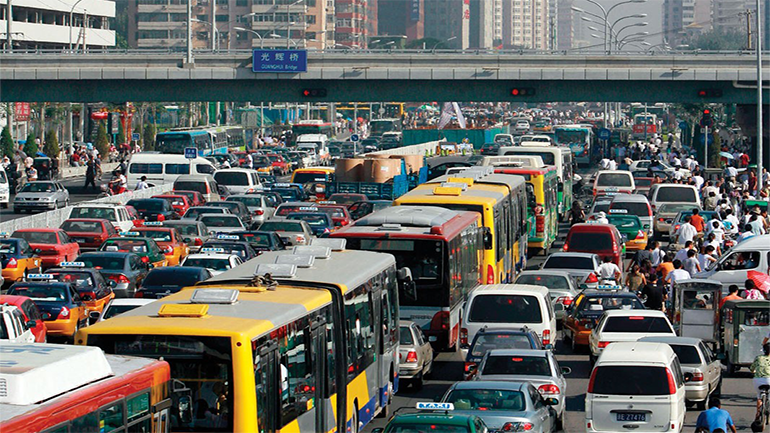 BEIJING — In the early morning haze, Sun Jian peddled his bicycle along a bustling ring road in Beijing, dodging buses and cars as he weaved his way through multiple lines of traffic.

"There are too many cars in the city — it's like pouring a basin of water into a small bowl," Mr. Sun, 39, said as he cut through a line of cars into a bike lane.

On good days, Mr. Sun, a Beijing native and founder of a popular bike club, must cope with congestion and pollution on his way to work. On bad days, he faces car doors that unexpectedly open ahead of him and bitter fights with drivers parked in the bike lane.

Mr. Sun's 30-minute commute is emblematic of a battle brewing on roads across the country. As China has urbanized, families have become more prosperous and many city residents have moved to suburbs many miles from their jobs. The resulting growth in car use combined with lax law enforcement have undermined a half-century tradition of commuting on bikes.

Nowhere is that battle more obvious than in Beijing, where buses, automobiles and electric scooters vie with cyclists for space. Today, only 12 percent of commuters in Beijing pedal to work, compared with 38 percent in 2000, according to government data.

But now, facing concerns about pollution, Beijing worries too many people have abandoned the bicycle, and it hopes to reverse course.

China's capital, often choked by motorized vehicles, is eager to encourage more commuters to return to two wheels. It wants to increase the proportion of commuters who use bikes to 18 percent by 2020, according to city transportation officials.

The move is part of Beijing's pledge to promote "green commutes" as it combats air pollution and traffic congestion. Acrid smog routinely blankets city skyscrapers and at times becomes so bad that it leads to an increase in hospital admissions.

Bikes became an integral part of China's culture after the Communist revolution in 1949. Along with a sewing machine and a watch, a bicycle was once considered one of the three must-haves of every Chinese household.

Only two decades ago, Beijing's streets were ringing with tinkling bells, and bike repair shops were kept busy. In fact, there were so many bikes that Beijing transportation officials reached out in 1994 to Dan Burden, then an American consultant with the United Nations, to solicit his opinion on how to manage them all given the new surge in private cars.

When told that the problem was too many bicycles, Mr. Burden offered the opposite view.

Mr. Burden told officials in 1994 that bikes were a "victim of unplanned car growth and should not be shoved out of the way," as they take up far less space than cars, he said in an email interview.

But Mr. Burden's advice was ignored.

"We believed the bicycle was the solution, but our message and solutions weren't fully heard," he said.

In the decades since, China has claimed the title of world’s biggest automobile market.

Persuading Beijing drivers to use their cars less is unlikely to be easy. To encourage more commuters to use bikes, city planners have proposed a ban on car parking on side roads less than 20 feet wide, more colored bike lanes and barricades to separate motor vehicles from nonmotorized ones.

But many cyclists here are skeptical that the changes will make Beijing's roads more hospitable anytime soon.

"What I can't stand is that there are practically no bike lanes, and these are often occupied by cars," said Fang Yongbin, who moved to Beijing last summer. He said he tried biking to work but quit after a month because of a variety of frustrations, including the smog and aggressive motorists.

Mr. Fang, who now drives to work, said that the measures being considered by officials gave him no assurance.

A study released this year by researchers at Peking University in Beijing found that air pollution, safety concerns and a lack of road space were the main reasons people avoided biking to work in the capital.

The sheer number of vehicles and the lack of parking spaces remain major issues, said Li Wei, an engineer at the Beijing Municipal Institute of City Planning and Design, who is helping draft regulations intended to improve bicycling and pedestrian infrastructure in Beijing. The city has designed parking capacities that can accommodate only half of the five million cars in Beijing, he said.

"Many cars are parked not in real parking spaces, but on the roads," Mr. Li said, adding that the city's transportation policies have long favored cars. "Beijing has really reached a limit."

"Private cars in Beijing are the most capricious and free," he said. "Whenever there's a traffic jam, the cars drive onto the side lanes, which used to be the nonmotor vehicle lanes. There is no other country in the world where cars can drive wherever they want."

0 responses on "Biking to work faces great challenges in Beijing"