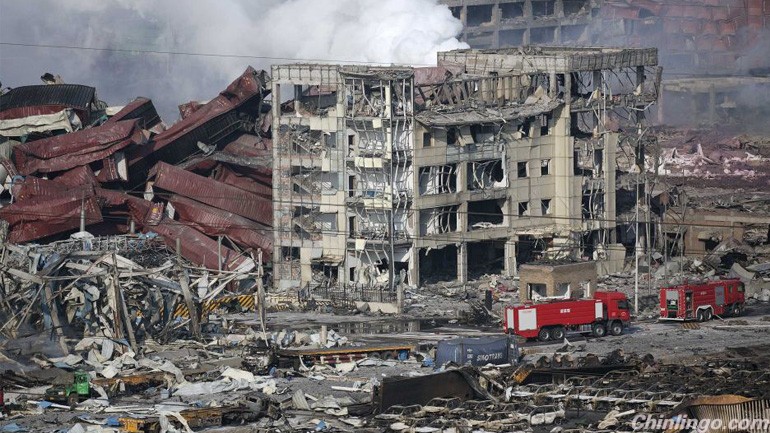 The sodium cyanide arrived at Rui Hai in wooden crates, hundreds every month, each marked "TOXIC" with an imprint of a skull and bones. The material was headed to mines around the world to extract gold from rock, but it was as deadly as the cyanide used in the Nazi gas chambers.

Storing and shipping sodium cyanide was one of Rui Hai's specialties. This summer, it had received an especially large shipment — 700 tons, enough to fill 35 shipping containers. But the company was authorized to store only 10 tons at a time, according to the 2013 environmental assessment.

Former clients said Rui Hai executives were willing to sidestep safety measures aimed at reducing the risk of accidents and often boasted of their ability to overcome bureaucratic hurdles.

"Whatever problem you had — not enough time, a huge order — they took care of it," said the chief executive of a large Chinese plastics company, who asked to be identified only by his surname, Liu, to avoid retaliation from the authorities. "Their talent was cutting through all the hassle."

Calisto Radithipa, a chemicals trader based in Hong Kong, shipped sodium cyanide to Zimbabwe through Rui Hai several times. "At the end of the day, it was profit first," he said.

Based on customs and transport records, officials say, Rui Hai was storing as much as 3,000 tons of hazardous chemicals on the night of the explosions, including 1,300 tons of ammonium nitrate and potassium nitrate, used in fertilizers and to create explosive materials. Also on the site were 500 tons of magnesium, an explosive powder, and metallic sodium, which is used to purify metal and can spontaneously ignite when exposed to air.

There were also unspecified amounts of calcium carbide, a highly flammable chemical used in welding; sodium hydrosulfide, an extremely toxic compound used in mining; and toluene diisocyanate, a compound used to make plastics that explodes when exposed to heat.

A year earlier, the stockpile was even larger. A routine safety inspection in June 2014 found 4,261 tons of hazardous chemicals. There is no indication regulators objected.

Experts say storing such large quantities of chemicals at one site is dangerous, because it heightens the risk of an explosive reaction and can exacerbate the damage caused by any fire.

"It's an incredible amount," said Neal Langerman, a chemical safety consultant in San Diego. "If you're going to have large quantities, you really have to do it right. If you do it right, it costs you money."

Chinese regulations require that hazardous chemicals be kept in well-ventilated areas, far from sunlight, power cords and other heat sources. But Rui Hai's warehouses were known for shoddy construction and outdated equipment, people involved in shipping chemicals from the warehouse said.

Chemicals are also supposed to be stored separately and at safe distances to reduce the risk of reactions. But Rui Hai often crammed containers full of different dangerous chemicals next to each other, former clients said.

Hu Jianzhong, a manager at a Tianjin logistics firm, said Rui Hai packed the containers together because the authorities had not allowed warehouses to devote more space to hazardous materials, even as the volume of chemicals going through the port increased in recent years. The safety assessment conducted by the private company before Rui Hai obtained its license noted that containers were stacked three high when two should be the limit.

Rui Hai was not the only facility with problems. A survey conducted in 2010 by the Ministry of Environmental Protection found that half of China's oil processing, coking, chemical and pharmaceutical plants were located within less than a mile of sites like schools and residential areas, in violation of regulations. And many Chinese chemical firms have cut back on safety training and ignore guidelines on storage to save on warehouse space, said Paul Pang, vice president of IHS Chemical, a research firm in Shanghai.

The government says it has contained the fallout from chemicals at the blast site, but residents in Tianjin remain worried about the long-term effects of the toxins scattered in the explosion.

"It might take decades for them to figure out the impact of so many chemicals in the air and water," said Zhang Yangyang, 29, a lawyer wearing a respirator who emerged from her home lugging a bag of possessions. "This is not a risk I'm willing to take."