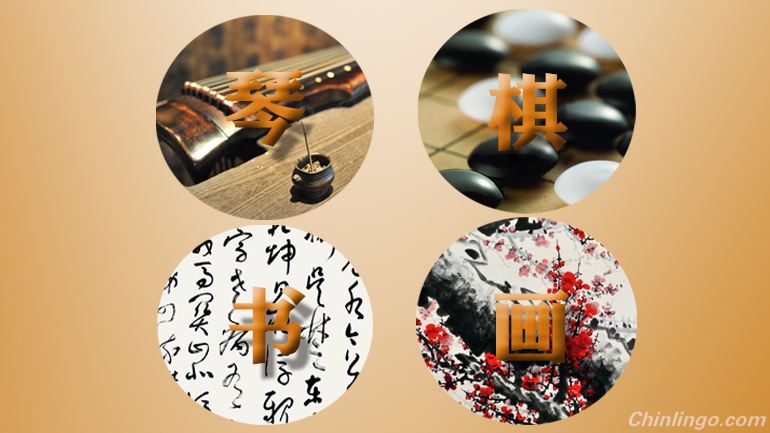 The four arts, 四艺 (sìyì) or 琴棋书画 refer to the areas which a Chinese scholar in ancient times was supposed to be proficient in. By extension, they have been influential across East Asia, and even if they aren't as important today, they have still left a mark on what an educated person ought to know. As a language learner, it's usually enough to know about these, rather than spend lots of time learning them.

The four arts are:

琴 (qín) – A seven-stringed zither, which is normally called 古琴 (gǔqín) today, and as the name implies, it truly is ancient with a history of at least three thousand years. Originally, 琴 (qín) referred to only this instrument, but today, the word is used in many other stringed instruments as well, such as 钢琴 (gāngqín) "piano" or 小提琴 (xiǎotíqín) "violin". Music is still considered an important part of education, but today, other instruments are more common, such as the piano.

棋 (qí) – A board game played on a gridded board with black and white stones. Just like for 琴 (qín) above, 棋 (qí) has also changed in meaning over the years and now include many other games. Originally, it only referred to 围棋 or Go (Japanese) as it is more often called in the West. The character 棋 (qí) also appears in other words, such as 西洋棋 (xīyángqí) “western (or international) chess" and 象棋 (xiàngqí) "Chinese chess".

书 (shū) – Calligraphy is the art of writing characters that has a very long traditional in China and East Asia in general and continues to influence and be influenced by painting (see below) and other art forms. Because of the importance of Chinese characters in Chinese culture, calligraphy plays a bigger role than it does in the west. Calligraphy today is normally referred to as 书法 (shūfǎ), whereas just 书 (shū) means "book".

画 (huà) – Chinese painting is the last and most creative of the four arts. Painting in the traditional style is normally called 国画 (guóhuà) "national painting" today, whereas 画 (huà) just means "painting" or "to paint". This traditional form of painting is also called ink and wash painting and is closely related to calligraphy, both in visual appearance and technique.

0 responses on "The four arts in traditional Chinese culture"