Chinese idiom: 半途而废 (give up halfway) 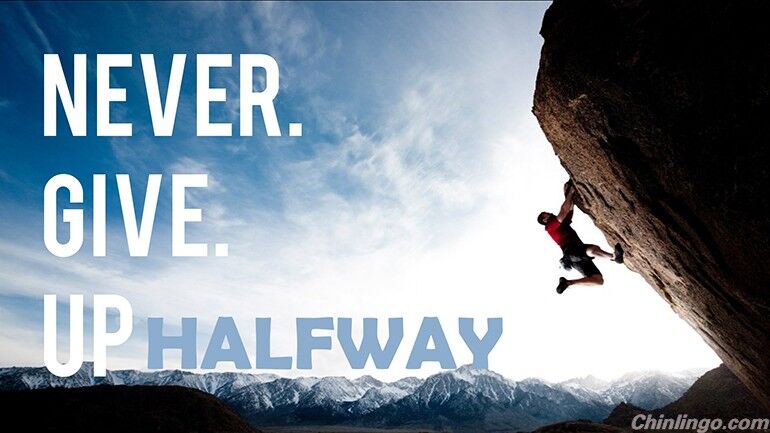 The idiom 半途而废 (bàn tú ér fèi): Literally 'Halfway along the road and abandoning [your task].' The original story can be found in《后汉书》, hou han shu 'The Book of Later Han'.

Once upon a time, this time specifically being the Eastern Han Dynasty, in what is now Henan province, there lived a man named Yue Yangzi 乐羊子. Although Yue Yangzi did not have high ambitions in life, he had taken a virtuous and sensible wife. One day, he came upon a block of gold, and he happily took it home. His wife told him angrily, "I heard ambitious people don't drink stolen water, honest people don't accept other people's food. This gold belonged to someone else, we should work hard to earn such a treasure!" On hearing her words, Yue Yangzi was very ashamed and discarded the piece of gold.

This event highlighted that Yue Yangzi really needed to learn more about how things were done. On advice from a friend and with his wife's approval, he found a teacher and began his studies.

One year later, Yue Yangzi returned home. His wife knelt before him and asked whether he had finished his studies. Yue Yangzi replied that he had missed her and come home. On hearing this, his wife jumped up, grabbed a sword, went over to her loom, and cut the piece of cloth there in half. She said, "Silk comes from silk worm cocoons. I have weaved it together thread by thread. Now I have cut it in half and wasted all my own time. Studying is like this. If you come home without finishing, you will have wasted the time you spent there every day."

Yue Yangzi felt ashamed again and returned to his studies. After seven years he completed them.

Nobody knows the name of the wife, but she has gone down in history as a model of virtue. The story goes on to tell how when Yue Yangzi is attacked by robbers his wife saves them, again by grabbing a sword and threatening them. So while the moral of the story is supposedly 'Don't give up halfway', one might also be inclined to think the bigger message is 'Always listen to your wife'.

0 responses on "Chinese idiom: 半途而废 (give up halfway)"