Have you ever heard of the Chinese character “囧”? 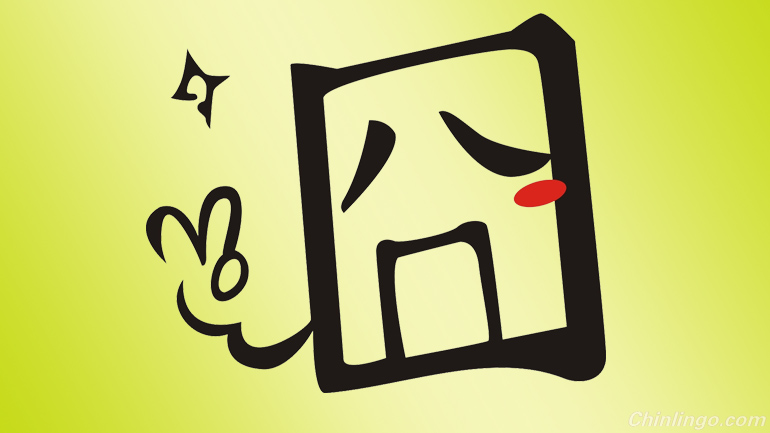 Many people assume it is some kind of symbol or picture when they read this character for the first time. However, it is a Chinese character with a long history. "囧 (jiǒng)" first appeared in the oracle bone inscriptions (inscriptions on bones or tortoise shells in the Shang Dynasty from 1766 to 1122 BC). Its outline looks like a sunlight shining through a window and that is why "囧 (jiǒng)" originally means "light" or "glory". But for the modern people, the shape of "囧 (jiǒng)" makes it look like a twisted face. Moreover, its pronunciation sounds the same as 窘 (jiǒng)" from the Chinese phrase "窘迫 (jiǒng pò)", which means "embarrassed", so "囧 (jiǒng)" is now used much differently than before – usually it refers to awkward and embarrassing moments.

On the Internet, this rarely used character "囧 (jiǒng)" spread through the whole nation. You can easily understand. You will know how to use this character correctly if you just look at it carefully and picture the facial expression. "囧 (jiǒng)" shows you a face with upside down eyebrows and a wide opened downturned mouth. Any awkward situation can be described by character "囧 (jiǒng)" .

It is nothing but awkward (囧-jiǒng) when making yourself a laughing stock in public. The bad jokes mostly are "(囧-jiǒng)" and people who heard them might feel "(囧-jiǒng)" as well. "囧" can be used to describe the facial expression of a person who is surprised as well, and Chinese people use this character frequently during chatting online.

This character also offers business opportunities for fast-moving entrepreneurs. Some established a website based on the theme of "(囧-jiǒng)"; some shot a film with "(囧-jiǒng)" in the title, like Lost in Thailand, and some even designed clothes or shoes with the character "(囧-jiǒng)" printed on them.

Nowadays, "(囧-jiǒng)" is not an elegant written character anymore, so you better not use it on formal occasions. But if you're chatting online, go ahead, it's a well known character in popular culture.

0 responses on "Have you ever heard of the Chinese character "囧"?"