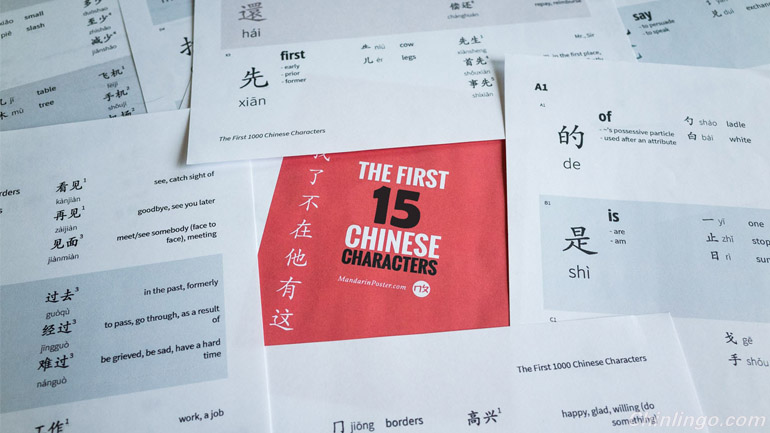 Of course "I" is first! It's the first word in a lot of beginner sentences and it is the key to understanding "me", "mine", "us", and "ours". Depending on where the character is in the sentence structure, it can be translated as either "I" or "me". To help you remember it and its tone, here's a picture of Wall-E.

This wasn't everyone's second choice, but it's surprisingly useful. For texting, WeChat, and comments, if you want to write laughter in Mandarin, you use 哈哈. Or, let's be honest, you might need to use 哈哈哈哈哈. But, that's entirely between you and your sense of humor.

Ni means "you". Just like wǒ, you can use it as both the subject and the object of a sentence, which makes it a great building block! While there is a formal version, this character is by far the more common of the two.

This is the character for the Chinese currency. It might seem like an easy one to pick up, but you'd be surprised how useful it is when you are trying to tell the difference on a sign between a store's closing time (21) and the price of the thing you want (22), while also trying to bargain. I'm not saying this was my addition to the list…yes, I am. That story happened to me.

Some of these words are good for travel and some were recommended for…other reasons. 知道 was specifically put on this list to get you started on texting in Chinese. It also gives you the option to be a little bit of a know-it-all. Which, when used in moderation, can be fun! Need an example? You get the text "I just figured out how to write hahaha in Chinese! Do you know it already?" And you can say "哈哈哈我知道."

The importance of knowing how to read "to be" really can't be overstated. It was on everyone's lists. And yes, it sounds like "shh". But there are other words, too. For example…a certain English curse word. On second thought, why don't we just stick with the little red riding hood reference for this one, huh? Or maybe the "shi" in "shirt"?

This character is the one you use for "hour". One step towards reading and writing "What time?" The other half is 几 (ji), by the way. 几点? Don't forget, it's also the character for the "diǎn" in 一点 ("a little").

This is the word for street and it's essential for navigation. Aside from just knowing where you are, you can use it to construct sentences like "What time are we meeting at Nanjing Road?"

Notice how this character looks like both the characters for "horse" (马) and "mama" (妈妈) and is almost pronounced the same way? 吗 is how you write the yes/no question particle. It's toneless (or fifth tone, neutral tone, soft tone), which means that it is spoken rather softer than other syllables and can carry some of the tone from the syllable before it. Whatever you call it, you're going to need it don't you think?

This is not the hao that means number (号). It's the one that means good. And you can build off of it to create other adjectives like "delicious" (好吃) or negate it to mean not good (不好) or not delicious (不好吃).

If I were to ask you what your most commonly used phrase is in Mandarin (as a non-native speaker), I've got a feeling you would say *points at object* "zhe ge". Our teachers felt the same and that's why numbers 12 and 14 are exactly that: 这个.

As previously noted in number 11, 吃 is half of the word "delicious". Or, it's 1/3 of the word "not delicious", if you're not a glass-half-full-kind-of-person. In other contexts, like when it's being a verb, it means "to eat" and it sounds like the "ch" at the end of "peach".

For the sake of the pattern that we've had so far in the article, ge is not next to zhe, like it is when you use it. The reason why it's one of your most commonly used words is that it's the most common measure word. It's substitutable for almost any noun, given the correct context.

And again, here we have a character previously referenced in number 11. Bu is the negative particle you can use to say "no" (in some cases), negate almost any verb in the present tense, negate adjectives and adverbs, etc., etc., etc. You can even use it to make a different kind of yes/no question, with the verb+bu+verb pattern. 是不是？

This list is just the beginning, of course. But, we want you to take away two ideas. One, each character on it is useful in more than one situation and, two, each one is taught within the context of the others. This isn't a list of random words, but a list of words you can use in combination with each other as well as with new words in sentences to help you remember all of them and start using them on your own. After all, the point of a vocabulary list isn't to get you through a test; it's to get you through real life situations.